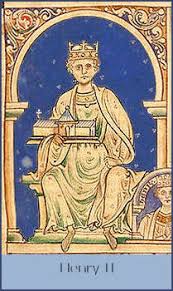 In a recent post entitled “Will No One Rid Me of this Meddlesome Priest?” I highlighted ‘Tone at the Top’ by discussing the words of Henry II leading to the subsequent murder of Thomas Becket. One of the things I learned on my recent vacation to England was that Henry II developed many of the procedural safeguards which became the basis of Anglo-American jurisprudence. While English Kings, at least after William the Conqueror, had always been able to issue Writs to direct the King’s subjects to perform tasks, Henry II developed certain standardized Writs which could be utilized to determine disputes between the King’s subjects, in a more fair and judicial manner. So today we will honor Henry II by discussing how he helped to bring procedural fairness to English law and how that relates to modern day compliance program.

Two of the most famous were the Writ of Novel Disseisin, which would allow a person to contest property ownership through a trial on the merits, decided by a jury. The second was a Writ of Mort D’Ancestor which allowed heirs to contest property distribution after a person’s death. As with the Writ of Novel Disseisin, it would be issued in the King’s name to the County Sheriff, who would seize the property in question. The matter would then go through a legal process culminating in a trial by jury to determine rightful ownership. Both of these Writs allowed a manner of procedural fairness to come into disputes which heretofore had not been present in English law.

Procedural fairness is one of the things that will bring credibility to your Compliance Program. Today it is called the Fair Process Doctrine and this Doctrine generally recognizes that there are fair procedures, not arbitrary ones, in a process involving rights. Considerable research has shown that people are more willing to accept negative, unfavorable, and non-preferred outcomes when they are arrived at by processes and procedures that are perceived as fair. Adhering to the Fair Process Doctrine in two areas of your Compliance Program is critical for you, as a compliance specialist or for your Compliance Department, to have credibility with the rest of the workforce.

The first area is that of internal company investigations. If your employees do not believe that the investigation is fair and impartial, then it is not fair and impartial. Further, those involved must have confidence that any internal investigation is treated seriously and objectively. I have recently written about several aspects of internal investigations, in order to emphasize how to handle internal whistleblower complaints in light of the Dodd-Frank implications. One of the key reasons that employees will go outside of a company’s internal hotline process is because they do not believe that the process will be fair.

B. Administration of Discipline and Employee Promotions

However, as important as the Fair Process Doctrine is with internal investigations, I have come to believe it is more important in another area. That area is in the administration of discipline after any compliance related incident. Discipline must not only be administered fairly but it must be administered uniformly across the company for the violation of any compliance policy. Simply put if you are going to fire employees in South America for lying on their expense reports, you have to fire them in North America for the same offense. It cannot matter that the North American employee is a friend of yours or worse yet a ‘high producer’. Failure to administer discipline uniformly will destroy any vestige of credibility that you may have developed.

In addition to the area of discipline which may be administered after the completion of any compliance investigation, you must also place compliance firmly as a part of ongoing employee evaluations and promotions. If your company is seen to advance and only reward employees who achieve their numbers by whatever means necessary, other employees will certainly take note and it will be understood what management evaluates, and rewards, employees upon. I have often heard the (anecdotal)tale  about some Far East Region Manager which goes along the following lines “If I violate the Code of Conduct I may or may not get caught. If I get caught I may or may not be disciplined. If I miss my numbers for two quarters, I will be fired”. If this is what other employees believe about how they are evaluated and the basis for promotion, you have lost the compliance battle.

So we should thank Henry II for showing us that he was more than simply about ‘Tone at the Top’. His changes in English jurisprudence helped lead us down the road to procedural fairness in the law and today in the workplace. You should thank him and remember that people will be more loyal if they think they have been treated fairly, even if the results are not exactly what they wanted.

This publication contains general information only and is based on the experiences and research of the author. The author is not, by means of this publication, rendering business, legal advice, or other professional advice or services. This publication is not a substitute for such legal advice or services, nor should it be used as a basis for any decision or action that may affect your business. Before making any decision or taking any action that may affect your business, you should consult a qualified legal advisor. The author, his affiliates, and related entities shall not be responsible for any loss sustained by any person or entity that relies on this publication. The Author gives his permission to link, post, distribute, or reference this article for any lawful purpose, provided attribution is made to the author. The author can be reached at tfox@tfoxlaw.com.
© Thomas R. Fox, 2011

The FIFA Indictments and Travel Act Prosecutions under the FCPA