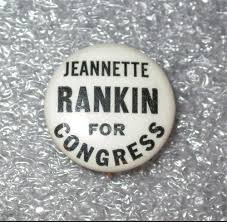 Who was Jeannette Rankin and why do we celebrate her today in the context of ethics and compliance? She was the first female to be elected to Congress, as a Representative from Montana in the 1916 elections. In 1917 she was one of 50 votes opposing America’s entrance into World War I. She had the courage to vote with the conviction of her conscience. Her reason for opposing entry into the War, how could Congress support a war to “make the world safe for democracy” yet still refuse “the small measure of democracy to the women of our country” by denying them the right to vote? Vilified after this vote, she was not returned to Congress in the next election.

History is filled with ironies and in one of the most ironic twists that could be imagined, Jeannette Rankin was returned to Congress from Montana in 1940. In 1941 she was the sole vote, of 389, against America entering World War II against Japan, declaring “As a woman, I can’t go to war and I refuse to send anyone else.” As noted in the November 2011 issue of the ABA Journal, “She told her constituents, that she’d voted her convictions.”

I thought about Jeannette Rankin’s story as I was reading an article in the November issue of the Harvard Business Review (HBR), entitled “Why Don’t We Try To Be India’s Most Respected Company?” which was an interview by HBR’s Anand Raman with N. R. Narayana Murthy who was a founder of the Indian company Infosys and its most recent Chairman of the Board. I often write about “Tone at the Top”, noting that not only does the US Department of Justice (DOJ) mandate it as one of the requirements for a best practices compliance program, but in reality it is the only way to set the tone for a corporation’s ethics and compliance program.

Murthy said that he was one of the original founders of Infosys and his vision of the company included the question “Why don’t we aim to be India’s most respected company?” To obtain the respect of governments, this meant to “never violate any laws”. To help to achieve this goal, the founders agreed to create a “values-based organization.” Murthy said that he believed that business would come if the company was respected.

He said that while it took some time for this ethical corporate reputation to take hold, eventually it did. One of the results was that corrupt government officials stopped asking the company for ‘favors’. This ethical reputation also led to the generation of greater and greater business because “our clients entrusted us with increasingly bigger projects.” He said that “you have to learn to stand by your principles; it’s wrong to believe that you have to bribe your way to success.”

Murthy said that Infosys managers are expected to lead by example, explaining that “Leaders have to be careful not to create dissonance between what they say and do.” One example he discussed was the consistency of discipline. He cited the examples of board members, who paid “heavy fines for what could be considered minor infractions.” Murthy believes that “Setting an example at the top is the best way to instill confidence throughout the company.”

So what do Jeannette Rankin’s two votes against America entering two World Wars have to do with Murthy’s interview? They both laid down their beliefs in the most transparent manner possible. I wondered what would be the effect if a US company Chief Executive Officer gave such an interview. Even if his or her company was a values-based organization, would they have the courage of their conviction to speak about it in such an open manner? (We will leave aside the question of whether the Law Department would allow them to do so.) Nevertheless imagine the effect it would have on employees and the commitment to doing business in an ethical manner if they did so.

This Week in FCPA, Episode 22 is up. Howard Sklar and I debate of the use of DPAs in the UK;  Freeport-McMoRan, United Steelworkers, and paying for police protection; Embraer; Tognum resignation; Dadeleh; Allianz;  plus a Breakout on Training.

Global Innovation for Your Compliance Program

Sherlock Holmes and Innovation in the Compliance Function, Part II – The Sign Of Four