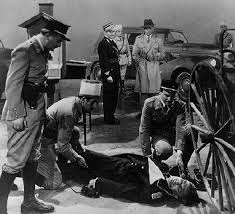 In Casablanca, one of my favorites movies of all-time is the great line of Claude Rains as Captain Renault, when he announces “Major Strasser has been shot, round up the usual suspects.” I was reminded of this when I recently read a paper presented at the 14th International Anti-Corruption Conference, entitled “Fuelling Transparency and Accountability in the Natural Resources and Energy Market”.

In this paper, Andrea Gillies explored the question of corruption endemic and systemic to countries with a large amount of natural resources and proposed some responses to it. Her paper focuses on the demand side of corruption rather than a supply side response such as the Foreign Corrupt Practices Act (FCPA). I found this interesting because, in the anti-corruption world, many persons believe that the energy industry is at the epicenter of FCPA enforcement. A quick review of the Top 10 FCPA settlements, of all-time, shows that five of the ten are energy companies. Is the reason simply that energy companies do work in “the usual places” where corruption is rampant? Or is that the cowboy tradition of the energy industry is what caused or contributed to the problem?

Gillies proposed five factors that made companies, in the energy resource rich industry, susceptible to the high risk of corruption. Her paper presents a more theoretical framework for analyzing how corruption can be seen to be a greater risk to certain industries. Her five factors are:

Technical complexity. There are few persons in these countries who thoroughly understand how the natural resource sector actually operates. This complexity runs across exploration, licensing, contracting, regulation, pricing, distribution and sale processes. This hinders oversight and increases the scope for manipulation by those who do understand and control sector transactions.

Concentration of resources and decision-making. Energy resources tend towards centralization. As control over resources is often vested in the state, this allows a small cadre of officials to have a disproportionate influence and access to resource revenues. The sector and its earnings frequently become tools for the pursuit of political or personal objectives by those who hold the reins. Assets and revenues are awarded along patronage lines which encourage and compromise systems of accountability.

Limited competition. This centralization also drives very small levels of competition due to the high degree of financing and technical expertise. Further, the state often limits competition among private sector players and reserves the role of oversight to itself. This low level of oversight can lead to unfair practices or exploit corruption.

Blurring of public and private interests. While in many industries, the role of the state is to ensure that commercial activities do not counteract the public interest, in the energy resource sector there is often conflicts of interest. This participation of a national oil company can compromise a government’s willingness to regulate fairly. There is also the risk that public officials hold direct or indirect interests in private companies to which they channel benefits and opportunities. This leads to an exacerbation in the risk of corruption in regulatory affairs.

Leverage.  Governments which control valuable natural resource deposits (and companies to a lesser degree) possess great influence. This leaves domestic and international advocates of transparency, integrity and good governance with few levers for affecting change. Such governments and companies can be quiet voices of dissent and undermine accountability systems through the allocation of their largesse. Natural resources revenues reduce the need to raise domestic taxes, eliminating another source of citizen-to-government accountability.

Gillies detailed a variety of strategies which can be employed to combat these systemic issues. She noted that while each of the approaches she suggested has made “some meaningful headway” there have been setbacks.

Strengthening legal and governance systems. This can help to reduce corruption as laws and regulations establish the foundation for ensuring that natural resources advance the national interest. They limit discretionary decision-making and create rules that can be monitored and enforced. Often times these laws also establish the roles of various institutional actors, both public and private. Along with strengthening the statutory environment, improving institutional governance and building capacity this can reduce conflicts of interest and limit space for graft. However, Gillies noted that such laws and regulations do not always impact behavior at the highest political levels and that genuine improvement “require both sustained political will and stronger laws, processes and institutions.”

Transparency. This is crucial among the most prominent approach to reducing natural resource sector corruption. While transparency rarely expose instances of corruption, it may well deter future corruption and empower accountability actors. Maximizing this transparency-to-accountability link represents a priority area for future work.

International Standards. This can be instrumental in aiding to define and promote practices which reduce corruption and bribery risks. While Gillies notes that enforcement of international standards is uneven and that such standards are voluntary, elected governments, which seek international respect or foreign investment, might alter their behavior in favor of compliance. So too might public companies with high image concerns. A clear and salient example here is the OECD Good Practices Guidelines which forms the basis for many countries anti-bribery and anti-corruption laws.

Multi-stakeholder approach. In countries at high risk for corruption multi-stakeholder dialogue and collaboration can build faith in public institutions and processes, increase common understanding among players with previously contentious relations, and facilitate the identification of mutually beneficial approaches. The difficulty with this approach is that such multi-party initiatives often struggle to exceed the ambitions of the “least interested constituent member” (the lowest common denominator problem).

Anti-Corruption Coalitions. This is the flip side to the Multi-Stakeholder approach. Under this approach many powerful coalitions and networks come together to increase their leverage and share expertise. Gillies cites the example of the “Publish What You Pay Coalition”, which currently works in over 60 countries, provides individual organizations with access to a network of collaborators and resources.

Consumer Campaigns. Similar to the Kimberley process, established in 2003 to prevent diamond sales from financing rebellious movements, the certification scheme aims at preventing “blood diamonds” from entering the mainstream rough diamond market. It was set up to assure consumers that by purchasing diamonds they were not financing war. There are now discussions of how to reduce trade in resources that enrich corrupt regimes.

Supply Side Initiatives. While the FCPA and other internal laws of extractor nations focus on the supply side of corruption and bribery, laws such as the recently enacted UK Bribery Act and US anti-money laundering laws can also prosecute corruption and seize the proceeds of corruption.  In addition to domestic law enforcement, international strategies like the FCPA, Bribery Act and OECD Good Practices can assist help to uncover and deter bribery and collusion. Other measures target corrupt politically-exposed persons (PEPs). US Presidential Proclamation 7750 allows the US State Department to deny visas to corrupt individuals.

So are companies which are resource rich really the Captain Renault in “rounding up the usual suspects” or are they more the Captain Renault when he leaves with Rick to migrate to the Free French Garrison? Much like Captain Renault, probably a little bit of both. Whichever you believe, Gillies paper is certainly worth considering in the context of a demand side solution to bribery and corruption.

Can a Libyan Rebel Be a Foreign Governmental Official under the FCPA?

Operationalizing Compliance: Part I – It All Starts with Pizza

This Week in FCPA-Episode 26, the East Lansing Edition