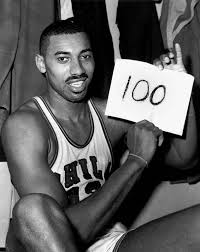 We conclude our sports themed week by noting today is the 50th anniversary of Wilt Chamberlain’s 100 point game. Wilt (aka the “Bigger Dipper”) went 36-63 from the field and an astonishing 28-32 from the free throw line on that night. The out-of-this-world performance was the highlight of a season in which he went on to average 50.4 points and 25.7 rebounds per game. In any sport, by any measure, it is one of the greatest individual performances of all-time. Unfortunately the game, played between the (then) Philadelphia Warriors and the New York Knicks, was played in Hershey, PA, and there was not a television broadcast or even surviving radio broadcast; only a few black and white photos exist and masses of mystique. I would also note with pride that today is Texas Independence Day. 176 years ago, on March 2, 1836 Texas declared its independence from Mexico. On April 21, 1836, Texas won its independence from Mexico at the battle of San Jacinto but that, as they say, is a story for another time.

This past week I received the March issue of the Harvard Business Review (HBR). The issue is titled “Special Report-Reinventing America-Why the World Needs the U.S. to Bounce Back”. I read the entire issue cover-to-cover. As I went through the content, subtitled appropriately enough “Special Report-Restoring U.S. Competitiveness”, of all the things that I read about, from the smallest news piece filler to the longest article, I did not see one mention that the US needs to amend the Foreign Corrupt Practices Act (FCPA) to become more competitive in today’s world.

The lead article was by Michael Porter and Jan Rivkin, entitled “The Looming Challenge to U.S. Competitiveness”. The authors reviewed five general areas they believe speak to this issue; none of which comes close to accusing the FCPA of making the US non-competitive in the global market. A review of these might well point our lawmakers to enact some legislation to actually help competitiveness, instead of making political theater over the FCPA.

The authors focus on long-term productivity and state that “Only by improving their ability to transform inputs into valuable products and services can companies in a country prosper while supporting rising wages for citizens.” This is not job creation but more production, generating high-wage employment growth, attracting foreign investment capital and fueling sustainable growth.

Does the US have a Competitiveness Problem?

The authors argue that the US problems are not cyclical but are more structural. They present five areas of concern to demonstrate the US problem regarding being competitive:

Cracks in the Foundation

Here the authors speak to the macro components of competitiveness. The macro arena requires sound monetary and fiscal policies, strong human development and effective political institutions. The authors believe that there are problems with all three. The debt is at an all-time post WWII high; health care and primary education do not reflect the large sums of money spent on them; and a polarized and paralyzed political system, at least at the federal level.

How Did America Get Here?

The authors believe that there are five key reasons the US has lost is competitive mojo. They are intertwined and “stem from changes in the world economy as well as failures within America itself.”

Call for Action, Not Despair

Nevertheless, much like Clint Eastwood, the authors are not ready to throw in the towel. In addition to remaining “fundamentally optimistic about America’s economic future” they also note that each state can play a role in a competitiveness comeback. After all, we are a country of 50 different laboratories for experimentation and regional and local leaders “can take step needed to boost competitiveness without relying on Washington.”

So, how about March 2, and the anniversaries of the Big Dipper’s century and Texas Independence Day? Wilt’s performance is one for the ages. But simply because it was done 50 years ago does not mean that it cannot be replicated at some point in the future. Borrowing from Clint Eastwood just a bit, if Detroit can make a comeback regarding competitiveness, then so can the rest of the country. And Texas Independence Day? It is one of those Justice Holmes monikered 50 laboratories of experimentation regarding competitiveness. If the federal government cannot get off its collective backside to increase US competitiveness, regional, state or local authorities could well take the lead.

None of these solutions discussed in the Porter and Rivkin article, or indeed the entire March issue of the HBR require FCPA amendment, tinkering, reform or any other change to the law to make American companies more competitive. If the House or Senate Judiciary Committee is truly concerned with US competitiveness, they could do no better than doing some reading on the real issues, starting with the March issue of the Harvard Business Review.

Bill James, the Baseball Abstract and the Use of Metrics in Compliance

Daily Compliance News: May 16, 2019-the CEOs and ethical lapses edition