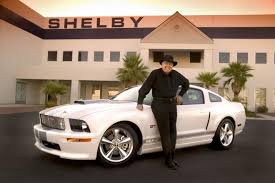 Carroll Shelby died last week. For anyone who following racing or loved the Muscle Car Era, no light shone brighter that Shelby’s. In 1959 (a little before I started to follow racing) Shelby was the first Texan to win the 24 Hours of Le Mans. Forced to retire from racing due to a medical condition, Shelby became one of the top race car designers in the 1960’s with his Shelby-American teams winning the 24 Hours of Le Mans, driving Fords designed by Shelby, to victories in 1966 and 1967. But I remember Carroll Shelby for those souped-up, mean as heck Shelby Mustangs, which debuted in 1965 and lasted until the end of the Muscle Car Era in 1971.

So what’s the compliance angle here? Well, believe it or not, it involves Wal-Mart. In its obituary for Shelby, the New York Times (NYT) reported that “Early prototypes broke apart because of stress on the fragile frames. “When you try to put 300 horsepower in a car designed for 100, you learn what development means,” Shelby recalled in a 2002 interview with Sports Illustrated.” From this I took away that any program, whether it is designing a race car or an atin-corruption compliance program requires development until you get it right.

I thought about this idea in the context of franchising and the Foreign Corrupt Practices Act (FCPA). Many franchisors do business overseas themselves and therefore should have a robust FCPA program based upon directly doing business internationally. However, if they franchise their operations internationally, they may have as much FCPA-based risk exposure through their franchisees operations. What are some of the FCPA risks for a franchised business internationally? In his book entitled “Foreign Corrupt Practices Act – A Practical Resource for Managers and Executives” Aaron Murphy, a partner at the firm of Latham and Watkins, explored the question of what are “the most common problems areas where managers get themselves into FCPA trouble.” In a chapter entitled “You Do More With the Government Than You Think” Murphy gives several examples of how any US company doing business overseas will come into contact with a foreign governmental official and, thereby, create a risk for possible FCPA liability. The following interactions would certainly apply to a retailer:

Interaction with Tax Officials. While noting that interacting with international tax authorities can present problems similar to those with customs officials, Murphy observes that the stakes can often be much higher since tax transactions may be less in frequency but higher in financial risk. These types of risks include the valuation of raw materials for Value Added Tax (VAT) purposes before such materials are incorporated into a final product, or the lack of segregation between goods to be sold on the foreign country’s domestic market as opposed to those which may be shipped through a free trade zone for sale outside that country’s domestic market.

Licensing and Permits. If your company is a retail seller of clothes, cosmetics etc., every physical location that you sell your goods in will require some type of license to operate your business. It could require multiple licenses such as a national license, state license and local municipal license, additionally you will need a building permit if you intend to build out or modify your retail stores.

Work Permits and Visas. If your company does any business overseas it will have to send someone from the home office to operate in-country at some point. In the post-9/11 world this probably means that, at a minimum, your company will have to obtain a visa for each employee who enters the foreign country and perhaps a work permit as well. The visa process can start in the United States with a trip to foreign government consulate or even the embassy and at that point you are dealing with a foreign governmental official. The work permit process can also begin in the United States but often may continue in the foreign country.

Inspections and Certifications. Consider the Tex-Mex restaurant chain which desires to take its cuisine across the world. In any city in the world there will be some type of certification process to enable to the business to set up and start operating and then there will be the need for ongoing inspections for sanitary conditions. Such inspections may be rare but if there is “slime in the ice machine” it may be grounds to close the restaurant.

As Murphy points out, it is clear there are many different types of FCPA risk out there which your compliance program needs to assess and address. Most companies are aware of risks of third parties in commercials operations, such as sales agents, resellers or distributors. However, the recent Wal-Mart matter has raised the awareness of risks from non-commercial third parties, particularly those which interact with a foreign government on the behalf of a company. There are many lessons which can be drawn from the Wal-Mart case but I think that  two, (1) that you do more with the government than you think and (2) the risks in using non-commercial third party agents, are very large areas that you may need to factor into the development of your compliance program going forward.

Lastly, do not forget the example of Carroll Shelby, Not only did he move from race winning driver to race winning car developer but over 30 years after the last Shelby Mustang from the Muscle Car Era rolled off the Ford assembly, he teamed with Ford to design a new Shelby Mustang for the company’s centenary in 2003. Keep on truckin’ Carroll Shelby!

Anti-Money Laundering For the Non-Banking Entity