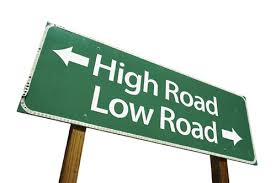 In the movie “Margin Call” the character played by Jeremy Irons says that there are three ways to lead in business: (1) Be the smartest; (2) Be there first; (3) Cheat. I thought about this trichotomy when reading several articles about the fine of $450 MM agreed to by the British bank Barclays on June 27, 2012 to settle allegations that it tried to manipulate certain benchmarks for rates, most particularly the London Interbank Offered Rates or LIBOR. The New York Times (NYT), an article by Mark Scott on June 29, 2012, entitled “Angry British Leads Take Barclays; Chief Executive to Task”, said that the rates which Barclays employees manipulated “are used to determine the costs of $350 trillion in financial products…” [Emphasis mine] More ominously for the US, according to an article in the Financial Times (FT) on June 29, 2012, entitled “Libor affair exposes big conceit at the heart of banking”, author Gillian Tett stated that “about 90 per cent of the US commercial and mortgage loans are linked to the index, too.” However, the one line from the article which struck me the most was a quote from Jonathan Hayward, a corporate governance expert in London, who said “This is not a compliance failure. It’s an ethical failure.”

So what takes business fraud and corruption from the more mundane world of a compliance failure to that of an ethical failure? Perhaps it is when, as Hayward further explained, “The actions served only one purpose, to manipulate the market.” What were some of the actions that Barclays took to engage in this systemic market manipulation? NYT reporter Scott detailed a litany of conduct by Barclays. UK regulators from the Financial Services Authority (FSA) found “pervasive wrongdoing by traders”. Some of the techniques included routinely submitting false rates to regulators at the behest of traders so that these same traders could manipulate buys and sells.

Remember the NYT article which broke the Wal-Mart scandal regarding allegations of bribery in its Mexican subsidiary? I opined that the last place a US company wanted to be was on the front page of the NYT accused of bribery and corruption and sweeping such allegations under the rug. I might now add that for a UK company, the last place they want to be is discussed as the lead editorial in the FT as Barclays was in the piece entitled “Shaming banks into better ways” on June 29, 2012. Starting with “few have shone such an unsparing light on the rotten heart of the financial system” and then going on to say “nothing less than a long-running confidence trick played on the public for personal and institutional advantage” and even pointing out the “rotten culture at Barclays”. The FT editorial clearly focused on ethics when it said “But beyond the questions about legality there is a bigger worry about the wayward behavior of the financial sector.” The FT editorial concludes by telling banks that if “banker-bashing is to stop, the banks themselves must change.”

After Wal-Mart found itself above the fold on page one, it announced both substantive and procedural changes to immediately strengthen its compliance program. Perhaps if you have a systemic compliance failure, one of the ways you can remedy it is to substantively upgrade your compliance program. However, if the whole core is ethically “rotten”, as opined by the FT, it is clear that at least the FT believes more that policy and procedure change is mandated. Tone at the Top does matter and it all starts there. If you have such an ethical failure, a company must seriously consider bringing in someone with the right tone. Some US some companies have learned this lesson the hard way through Foreign Corrupt Practices Act (FCPA) violations. It appears that Barclays may be in for the same schooling.

Steve Sabol, NFL Films and the Look and Feel of Compliance-Authenticity

This Week in FCPA-Episode 128, the You thought you had a bad week edition