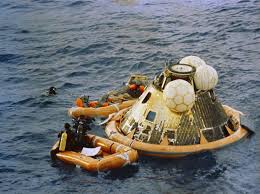 On May 25, 1961 President John F. Kennedy told a special joint session of Congress: “I believe this nation should commit itself to achieving the goal, before this decade is out, of landing a man on the moon and returning him safely to Earth.” Forty three years ago, today, on July 24 that dream was accomplished when Apollo 11 which had landed Neil Armstrong and Buzz Aldrin on the moon on July 21, returned home safely. Even with the insanity of America in the late 60s, it was an event that we rejoiced in because it seemed to encompass our best values as a nation. New York Times (NYT) columnist Thomas Friedman, in an article on Sunday, July 22 entitled “The Launching Pad”, said that “Cape Canaveral was the launching pad for our one national moon shot. It was a hugely inspiring project that drove scientific research, innovation, education and manufacturing”. In short, the space program was a bold statement of our national values.

I thought about Friedman’s article and more sadly, Sally Ride, the first female astronaut in space, in relation to a recent article in the Corner Office section of the NYT, entitled “It’s Not About Me. It’s About Our Company Values”, where Adam Bryant reported on an interview with Cathy Choi, President of Bulbrite. Ms. Choi came to her current position in a usual manner; however this different route gave her some interesting ideas about her management style. I found her journey in the business world to be an interesting arc in the context of a compliance practitioner seeking to move the compliance program forward in his or her company.

Choi’s educational background is in mathematics and theater. After receiving her undergraduate degree she got an MBA from New York University and went to work for a “big accounting firm”. From there she went to work as a Personal Assistant to a Hollywood movie producer. The company she now runs, Bulbrite, a lighting maker and supply company, was founded by her father who gave her the opportunity to come in and run the company.

Choi wondered not only if she could ever walk in her father’s shoes but whether the company’s employees would accept her. The hardest thing was “walking into a set culture and trying to adapt to that culture, while still making an impression.” To help accomplish the transition, her father taught her to “take a deep breath” when she had an idea to change the company. By taking that deep breath, it provided an opportunity for thought and reflection. If the idea was good before she took the deep breath, it would still be good after it was more thoroughly considered.

It’s About the Company

One of the more interesting insights that Choi had regarding her transition to leadership from her father was to “build an intentional culture.” By this she made a “concerted effort to make the company the leader, not me or my dad.” She began by asking the employees what their personal values were and why they held them. She catalogued these values on a white board and began to note patterns; such values as integrity, team spirit and commitment to each other stood out. She developed these values into an acronym “BE BRITE” and the company uses this as its touchstone for alignment in company decisions such as hiring.

Start From the Ground Up

Choi said the next step was to come up with a group of accepted behaviors which supported the company’s value systems. Her role was to listen and be a facilitator. Choi did not take a leadership team offsite and come up with these values or behaviors, they all came from the employees, or as Choi put it “from the ground up.” She felt that by doing this it gave the company’s value structure, “a life of its own.” In other words, she made the values about the company and the company the values leader.

For the compliance practitioner sometimes the biggest challenge is not only to get senior management but the troops in the trenches to embrace compliance. That is why I found the message of Cathy Choi so useful. She came into an environment that was totally foreign to her coupled with the fact of being the owner’s daughter. Yet she was able to turn these potential negatives into positives by taking some very basic steps, such as taking a deep breath, engaging others and listening to what they had to say and building a value system from the ground up rather than imposing one from the top down. Her story is a powerful lesson of one way to get those troops in the trenches to buy into what the compliance department is selling.

C’Mon Man Or the End of the World?

Internal Controls under the UK Bribery Act and FCPA

Innovation in Compliance Episode 11: The ROI of Compliance with Ben Locwin