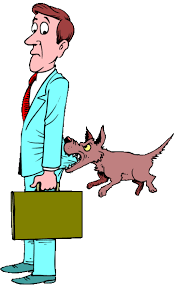 As most readers of this blog know, I am a recovering trial lawyer. I almost always acted as defense counsel for corporations in my trial lawyer career. In the trial lawyer world, there are four recognized defenses to any claim which are affectionately known as the “Dog Bite Defenses”. They are:

The fourth version of the Dog Bite defense is certainly an ‘all-in’ move. You had either (1) better be right or (2) have some big kahunas to make that argument to a jury with a straight face.

None of the cases I defended involved allegations of violations of the Foreign Corrupt Practices Act (FCPA) but some did involve corporate fraud. In an article entitled “Business Ethics and Moral Motivation: A Criminological Perspective” Joseph Heath took a look at the prevalence of white-collar crime in the discussions in business ethics. In his abstract he stated that “One of the effects that has been the development of a strong emphasis upon questions of moral motivation within the field. Often in business ethics, there is no real dispute about the content of our moral obligations, the question is rather how to motivate people to respect them. This is a question that has been studied quite extensively by criminologists as well, yet their research has had little impact on the reflections of business ethicists.” In this article, I attempt to show how a criminological perspective can help to illuminate some traditional questions in business ethics. I begin by explaining why criminologists reject three of the most popular folk theories of criminal motivation. I go on to discuss a more satisfactory theory, involving the so-called ‘‘techniques of neutralization,’’ and its implications for business ethics.

In a post entitled “A Criminological Perspective on Business Ethics” my fellow cyclist and blogging colleague Doug Cornelius reviewed Heath’s work. He noted that Heath began with the premise that the ethics scandals in the early years of the twenty-first century were not a business ethics failures but were really high-level, large-scale white collar crime. While the actions of the senior management of Enron, WorldCom and Adelphia were certainly illegal acts, these acts were probably surrounded by unethical conduct. However, the core actions all involved a failure to comply with the law.

What interested me about Heath’s article was that large corporations seem to generate a very steady stream of rather plausible (or plausible-sounding) excuses for misconduct. He believed that this “is the result of a confluence of factors: first, corporations are typically large, impersonal bureaucracies; second, the market allows individuals to act only on the basis of local information, leaving them in many cases unaware of the full consequences of their actions; third, widespread ideological hostility to government, and to regulation of the market in particular, results in diminished respect for the law; and finally, the fact that firms are engaged in adversarial (or competitive) interactions gives them broader license to adopt what would otherwise be regarded as anti-social strategies.” Doug summarized these in his post which I cite in their entirety:

The offender claims that conditions of responsible agency were not met: it was unintentional; he was insane, he was provoked, he had ‘‘no choice’’ but to do it, it was all an accident, etc. In a company, an employee can blame his boss for telling him to do something wrong. The boss can pass the blame back down to the worker saying they acted independently.  The competitiveness of the marketplace and the workplace means that if one individual refuses to perform an illegal act, he may feel that he could simply be replaced by someone else who would.

The offender seeks to minimize or deny the harm done. Most white collar criminals never meet or interact with those they harmed.  In many cases they wouldn’t even know how to find their victims.  “In these cases, there is potential confusion as to the identity of the individuals who are harmed by the criminal’s actions. In other cases, the mere fact that there is diffusion of the harm over a very large number of persons is appealed to as grounds for denial that anyone was injured by the person’s actions.”

Denial of the victim

The offender acknowledges the injury, but claims that the victim is unworthy of concern because he deserved it. The underpayment inequity is common. It’s hard to find an employee who believes that an enhancement of justice in society would require a reduction of his compensation package. On the other hand workers may feel under compensated, ignoring the difference between the ease with which they can be replaced that determines their wage rate, and their contribution to the company. It is really easy for workers to convince themselves that they are not stealing. Instead they believe they taking what they are owed, or they are punishing the company for treating employees poorly.

Condemnation of the condemners

The offender attempts to ‘‘turn back’’ the charges by impugning the motives of those who condemn his actions. The classic examples in corporate crime are the charges fired back at Eliot Spitzer during his time as Attorney General when he exposed a wide range of practices in the financial services industry. His political ambitions were often discussed side-by-side with his prosecutions.

The offender claims that the action was done out of obedience to some moral obligation that conflicted with the law. You often hear “I did it for my family.” The offender can see the company as a proxy and serve as an object of higher loyalty. One theory with Ken Lay and Jeffrey Skilling at Enron is that they misled investors for the sake of the company, insisting that it was a great company. There is also the more common business ethics excuse that it was done for profit and the benefit of the shareholders.

Everyone else is doing it

The mere fact that others are breaking the law is used to suggest that it is unreasonable for society to expect compliance. This is an excuse for all kinds of crime, but it is very common in a business context because of the competitiveness of the business environment.

An offender claims he was acting ‘‘within his rights’’ and that the legal prohibition of his conduct constituted unjust or unnecessary interference. One of the big differences between corporate crime and street crime is how often white collar criminals deny the authority of the laws that they have broken. The argument is that the government should not regulate certain forms of private transactions.

Heath argues that the focus on these techniques of neutralization is more effective in addressing business ethics and corporate crime than theories of “moral motivation.” The field of criminology has largely discredited those theories as folk tales. It’s not about character, greed, and values.

Another colleague has summarized these defenses along with some others that he has heard over the years into the following “Employee Defenses”. They certainly more fully expand on the Dog Bite defenses that I used, or rather, that I heard other defense lawyers were forced to use, in defending cases.

What does all this mean for a compliance practitioner? First, it speaks to the need to be ever vigilant in your overall FCPA or UK Bribery Act compliance regime. You must work towards both the prevention and detection prongs of McNulty’s Maxims. The pack mentality is part of what makes a corporation succeed so you must make clear that there will be no tolerance for retaliation against whistleblowers (as in – they are not ‘team players’). Lastly, when you begin any internal investigation, you need to be prepared for these defenses; whether they are the straight-forward four Dog Bite defenses, Heath’s list of justifications as summarized by Cornelius or the 13 point formula of employee defenses.

So, while thinking of all this, Happy Labor Day!