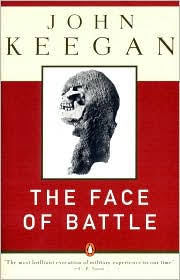 On August 2, Sir John Keegan died. He was one of the most influential military historians I have ever read or had the chance to hear speak in person. Keegan was knighted for massive output. In his August 3, 2012 obituary in the New York Times (NYT), David Binder noted that “Sir John’s body of work ranged across the centuries and continents and, as a whole, traced the evolution of warfare and its destructive technology while acknowledging its constraints: the terrors of combat and the psychological toll that soldiers have endured.” For Tip O’Neill, all politics was local, for Sir John Keegan, all military history was individual.

I, probably like most Americans, was introduced to Keegan through his seminal work “The Face of Battle” which launched his publishing career. The Historian J.H. Plumb called it “so creative, so original” and “a huge achievement.” Binder commented that “He examined three battles in the book: Agincourt in 1415, Waterloo in 1815 and the Somme in 1916…all involving the English. His tale was somber and compelling about what happens in the heat of battle, including the execution of prisoners.” Further, “the military historian, on whom, as he recounts the extinction of this brave effort or that, falls an awful lethargy, his typewriter keys tapping leadenly on the paper to drive the lines of print, like the waves of a Kitchener battalion failing to take its objective, more and more slowly toward the foot of the page.”

But for me, he drove home what battle was like for the ordinary soldier. I can still recall his descriptions of the English long bowmen and the French knights they decimated. In another book, entitled “The American Civil War”, he looked at the role of geography in conflict. Once again he approached the subject of military history in a new and fresh way that brought the subject alive to me while challenging me to reconsider the traditional great man view of military history.

I thought about Keegan’s focus on the everyman of battle today while participating in a webinar entitled “A Real-Time Solution to Managing Fraud and Corruption Risk” hosted by the company Oversight, they have a software product which allows continuous monitoring of data. One of the topics covered in the webinar was fraud and employees who commit fraud. Fellow presenter, Jeff Harfenist, who is a CPA, MBA and a Director with the Berkeley Research Group, emphasized that fraud almost always start small, with the participant or participants typically starting out small, then increasing in complexity and aggressiveness. The perpetrators will then often grow the fraud in magnitude, while sometimes increasing the number of participants. Unfortunately they will rarely cease on their own accord. In other words, the concepts Jeff talked about seemed to me to fit into Sir John’s analysis of the everyman of battle: what they did and how they did it.

Jeff further explained that data mining software, such as that by the event sponsor Oversight, coupled with advanced analytics and exception management capabilities added together with established forensic protocols and recognized investigative methods could provide real-time (or near real-time) detection in variety of areas. Some of these could include inefficiencies in purchasing, potentially anomalous transactions, high-risk relationships, compliance failures and circumvention of internal controls.

I often talk about McNulty’s Three Maxims of Compliance: (1) What did you do to prevent it? (2) What did you do to detect it? And (3) When you discovered it, what did you do to remedy it? Control monitoring moves an internal audit function from the second step, “detection”, to the first step “prevention” through the active, ongoing and real time process as it evaluates 100% of the transactions or associated target functions in real-time (or near real-time) which is highly automated and can be repeated on an as frequent basis as required. The continuous monitoring approach allows you to experience what the individuals in your company are doing on a real-time (or near real-time) basis down to the single transactional level on a repeated basis.

If you were not able to attend the webinar, you can listen to it, while viewing the slides by clicking here.

The Patriots, the NFL and Compliance