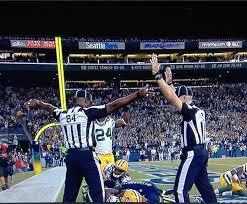 Today I had thought about opening my post with the famous Popeye line “I’ve had all I can stand, I can’t stands no more!” or perhaps ask if Mike Tyson was at the Broncos v. Texans game last Sunday post but I thought that I would begin with something even more dramatic.

My Irish Mother-in-Law called from England to ask my wife what the heck is going on with the NFL and the replacement refs.

Yes folks, it’s that bad. So bad in fact that the final play of the Packers v. Seahawks game and replacement referee controversy is on the front page of today’s Financial Times (FT). So bad that both President Obama AND Mitt Romney have said the National Football League (NFL) needs to end its lockout of the real referees.

What is it that is so bad? It’s the continued use of replacement referees by the NFL. The NFL is literally killing its own franchise by continuing to use replacement refs. Monday night’s example was the first where the NLF’s idiotic use of replacement refs was encapsulated in one play. For the very few people (apparently) across the globe who do not know the story. Seattle threw a Hail Mary pass into the end zone on the last play of the game, which was intercepted by a Packer’s defensive back. The Seattle receiver, who did not catch the ball, somehow put his arm over the arms of defensive back, who had the ball cradled against his chest. As the two players fell to the ground, the Seattle receiver rolled over on top of the Packer defensive back. There were two out of position replacement refs who ran up. One (correctly) signaled interception and the ball to Green Bay and the other signaled a Seattle touchdown, apparently believing that a simultaneous catch had occurred. A touchdown was ruled on the field and upheld by the replay official. The catch and touchdown changed a Packer win into a Seattle win so now we have the poor quality of the replacement refs changing the outcome of a game.

As bad as this call was, and it was very bad, it was just one more drop in the value of the NFL, all caused by using replacement refs, who are so bad that they have created a safety issue for the players. On Sunday, in the Denver v. Houston game, on two consecutive plays, a Denver defender had a personal foul of roughing the passer. The second penalty was so horrific that the Denver defender not only knocked the helmet off Houston quarterback Matt Schaub but actually took off part of Schaub’s ear! Were any players ejected, even while Matt Schaub was being escorted off the field missing part of his ear? That would be a No.

In addition to blowing a call that cost the Packers the game; losing control of a game so badly that a player goes half-way Mike Tyson on single play; the games themselves have become unwatchable. They are basically meetings of referees trying to (1) figure out the rules and (2) apply them, punctuated around some folks occasionally playing football. There is no flow, no momentum and for the most part little action. What had been a 3 to 3.5 hour viewing experience is now much longer.

So what was the NFL response to all of the above? KISS MY GRITS

How do we know this? First the NFL released a statement that the call was correct. Second they said that they have full confidence in the replacement refs. Lastly, they saw no reason to go back to the bargaining table. Is it arrogance? Stupidity? Whatever it is, it’s wrong, wrong, wrong.

But thanks for hanging on this long into the post to hear about the compliance angle. So for a Compliance Department and/or a Compliance Practitioner – do not tell your internal clients to KISS MY GRITS, if you do they will stop listening to you because they will think that you are an idiot.

But what about the NFL? What can their customers do? First let me say that I am a fan. I grew up in a single high school town in Texas where football was king. I grew up watching the Dallas Cowboys of Dandy Don Meredith and Roger Staubach. I religiously follow the University of Texas Longhorns each Saturday. I played football into high school. I watch pro games all day Sunday, Monday, Thursday and whatever night they are on. I even have the NFL Red Zone package so I can watch all the games. Even more than being a fan, I have been a referee. I know the rules and I know what a simultaneous catch is and it certainly did not happen on Monday night. But like Popeye, I can’t take it anymore.

So here is what I can do. I am going to boycott all the NFL games until the League gets the replacement refs off the field. No television, no radio, no iPad, no iPhone. No nothing. Will I miss it, you bet I will. But as neither the quality of the product, the safety of the players nor even the integrity of the game seems to matter to the NFL owners, maybe not watching their games will get their attention. I hope so. I miss pro football already.

Gifts, Travel and Entertainment Under the FCPA – Part II

As a lifetime Packer fan, I am going to join the boycott with you until the lock out ends...wait, it ended today! In all sincerity, thanks for all the work you put into this blog. This article has made me look internally to make sure we don't have any 'replacement officials' performing compliance functions/reviews that are not properly trained.