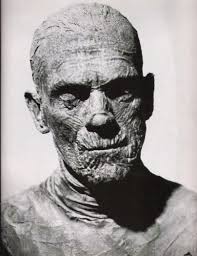 We continue our celebration of the Universal Pictures monster movie films by looking at the classic The Mummy, which was released in 1932 and starred Boris Karloff. In many ways I found this to be the most hauntingly filmed of the classic monster movies. Perhaps this was due to the director Karl Freund, who was in his directorial debut for this film. He is probably best known as Universal’s top cameraman and the person who set up some of the great shots for the gamut of Universal pictures in the 1930s. His use of shadings in the black and white era added an aura of mystery that is not present in today’s films. This movie is probably the best visual feast of all the classic Universal Picture horror films.

One cannot see the movie, or indeed write about it, without talking about the makeup artist, Jack Pierce, one of the truly greatest makeup artists of any era. He headed Universal’s Makeup Department until 1948 and personally created the makeup for all of the classic Universal Pictures monsters. While most people think of Frankenstein’s monster as Pierce’s greatest creation, he saw the Mummy as his true masterwork. The application of the makeup was arduous, taking up to eight hours of work on Karloff to complete the 3000 year old look for the Mummy.

For me, most haunting scene is one which occurs quite early in the movie. After a spell is read aloud, bringing Karloff as the Mummy to life, the casket which houses the Mummy is left open allowing the Mummy to escape into the present day world. One of the young archeologists sees the Mummy walk out of the room and immediately goes insane. I can hear his haunting scream in my head to this day. But here is the key to making this scene so powerful, we never see the Mummy; the only thing we see is some of the rags trailing from his body as he walks out of the room. Too bad today’s gore-fest directors have forgotten what real terror can be.

The basic story line is that Imhotep, the High Priest of Egypt, was mummified after the Pharaoh found out he had fallen in love with the Pharaoh’s wife Princess Anck-es-en-Amonand. As a Mummy, Imhotep was condemned to eternal damnation and his soul would never to go the afterlife. After he is released from this curse in the 20th Century with the reading of the spell, Imhotep searches for the reincarnation of the Princess. He finds her in modern day London, as Helen Grosvenor, played by the alluring Zita Johann; the Mummy tries to convince her she is the reincarnated Princess Anck-es-en-Amonand and to join him in an eternal love affair. Grosvenor prays to the goddess Isis who sends a ray into Imhotep which turns him into dust.

So the compliance angle here? It’s the difference between two companies in their responses to compliance challenges. Exhibit A is Goldman Sachs and their continuing PR nightmare named Greg Smith. Smith exploded onto the ethics scene with his very public resignation from Goldman Sachs and Op-Ed piece in the New York Times (NYT) in March. The NYT piece castigated Goldman Sachs both internally for their drive towards the all mighty dollar (horror) and their external relationships with their clients, for basically the same reason (horror, horror). This week Smith has made the rounds of several shows including a prominent feature on 60 Minutes to plug his recently released book entitled, “Why I Left Goldman Sachs.”

I had wondered what Goldman Sachs public response would be to Smith’s allegations. Would the firm go “Swift Boat” on him? Would they take any credence to his allegations, investigate them and remediate any issues they found open? Some of these questions were answered in an online post by Kevin Roose, entitled “Goldman Sachs Reveals its Greg Smith Battle Plans”, where Roose attached a Memo that Goldman Sachs sent out to its employees with the talking points that they should use when responding to Smith’s allegations.

Goldman Sachs did not go full ‘Swift Boat’ but only attacked Smith as (1) opportunistic because he was not doing that well on the Goldman Sachs promotion ladder and (2) he really was not in a position to know about the things he was talking about anyway. What I found the interesting part of the Goldman Sachs Memo was that it focused on some of the positive actions the firm had taken regarding ethics and compliance with its Code of Conduct. While I had hoped that Goldman Sachs had performed a deep dive and investigated the allegations made by Smith; it did not announce that it had done so as a part of the talking points in its Memo.

Contrast the Goldman Sachs approach with the ongoing story about NCR and the Foreign Corrupt Practices Act (FCPA) allegations. As reported by Chris Matthews and Sam Rubenfeld in Wall Street Journal (WSJ) article entitled “NCR Investigates Alleged FCPA Violations”, NCR had a lawyer, Daan Thorig, removed and transferred because its business folks in China had the view that Thorig “doesn’t understand China at all”. The issue, which brought all this to a head, was when Thorig would not approve a client entertainment event for Chinese government officials. This same business person, Gary Miao, later requested that Thorig be removed from his position and be replaced with a lawyer who “understands our business”. Lo and behold, Thorig was not only replaced but shipped out half way across the globe. Ominously, the WSJ article reported that “Thorig is no longer with the company.” The above article came about through an interview by the authors with an anonymous tipster who had whistle blown on NCR about L’affair Thorig. NCR’s initial response was to actually attack this anonymous person as not knowing what he was talking about.

So what did this anonymous tipster do? He sat down with two folks who are in Ethisphere’s Top 100 most influential people in the FCPA and wider compliance world and laid out emails for them about NCR’s conduct. In addition to the emails about L’affair Thorig this tipster also had emails about NCR’s business conduct in several other parts of the world which also may raise FCPA implications. In a September, 2012 8K filing NCR then attacked the whistleblower with the following language, “We have certain concerns about the motivation of the purported whistleblower and the accuracy of the allegations we received, some of which appear to be untrue.” I guess they did not learn too much from their first attack.

So what lessons can we draw from these very disparate responses? One would have to say that NCR’s response has been about as wrong-headed as a company’s can be. By basically challenging the anonymous whistleblower to come forward, he (or she) did so with two very well known and well respected journalists in the compliance world. I am sure that the Department of Justice (DOJ) will be very interested in the results of these internal investigations by NCR. But more importantly what kind of message does the reported facts and the public responses of NCR  send to its employee base? Is it keep your mouth shut or else? Do the business guys dictate what compliance approves? How about if you want to bring a problem up the line internally at NCR? Will you be shipped out on the next boat across the globe or even have to leave the company? Unlike the Mummy, Isis will probably not point a death-ray at NCR and turn it to dust but it sure may be in for quite a (FCPA) ride.

Since there are only questions at this point, I would suggest that you sit back and pop in the original version of The Mummy. Just as Helen Grosvenor remembered who she was when she prayed to Isis perhaps NCR will remember that it is a US based company subject to the FCPA and will embrace whistleblowers as a useful tool of the modern compliance program.

One thing I forgot to mention is that as it is a 1932 production, it is pre-Code. So be on the look for some interesting ladies garments. As I said, a visual feast for all.

Election Day – Just Who is a Foreign Government Official?

Interview with Brian Ching – Ideas on Engaging Your Compliance Constituency

Commitment to Compliance: the Compliance Committee

Succession Planning from the Compliance Perspective