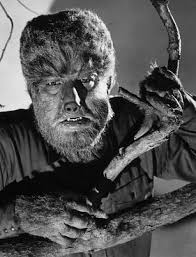 Even a man who is pure in heart,

and says his prayers by night,

may become a wolf when the wolfsbane blooms,

and the autumn moon is bright.

Today is Halloween and in this post I conclude my celebration of the Universal Pictures classic monster movies from the 30s and 40s. Today I submit, for your compliance consideration, my favorite of the classic monsters movies The Wolfman. I simply cannot see this movie enough. From the horrific scene where Lon Chaney Jr. kills Bela, the gypsy who had the pentagram, the mark of the wolf, to the ending scene where Claude Rains inadvertently kills his son, Lon Chaney Jr., in his incarnation as the beast with a silver tipped cane, I find it to be the most psychologically complex of all the classic Universal monsters.

The acting was first rate. Lon Chaney Jr. as Larry brought a psychologically-nuance to the role that rivals only Karloff as Frankenstein’s Monster for depth and complexity. Claude Rains, although a good 6 inches shorter than Chaney, plays his father Sir John Talbot and showed why he was one of the great character actors from the 1930s to the 1960s. Maria Ouspenskaya as the gypsy fortuneteller Maleva who cares for Chaney after he has been attacked by her son and changed into a werewolf brings heart and soul to a role which could have easily fallen into camp. And then there is Evelyn Ankers as Gwen Conliffe, Talbot’s love interest. In many ways she ascended to the ‘damsel in distress’ role created by Fay Wray in King Kong. She is gorgeous in the role and just the right amount of innocence and sex appeal.

In the twilight and with low hanging shrouds of fog, Larry attempts to rescue Gwen’s friend Jenny from what he believes to be a sudden wolf attack, he kills the beast with his new walking stick, but is bitten on the chest in the process. The gypsy fortune teller, Maleva reveals to Larry that the animal which bit him was actually her son Bela (played by the omnipresent Béla Lugosi) in the form of a wolf. She tells Larry that Bela had been a werewolf for years and now he would be transformed into one. When the full moon rises, the sign of the Pentagram appears on Larry and he is transformed into a wolf-like creature and stalks the village, first killing the local gravedigger. He retains vague memories of being a werewolf and wanting to kill, and continually struggles to overcome his condition. He is finally bludgeoned to death by Sir John, with his own silver walking stick, after attacking Gwen.

My favorite scene? It actually occurs in the first sequel, Frankenstein Meets The Wolfman, where two forlorn grave robbers break into the Talbot Family Crypt, where Larry is buried after being killed by his father at the end of the original Wolfman movie. They pry open the burial tomb just as the full moon is arising, which of course awakens the beast in Larry. He transforms into the Wolfman and kills the grave robbers. It simply is a fantastic cacophony of light, shading, violence, folklore and terror.

So what does The Wolfman introduce from the compliance perspective? In this case, it is reverse psychology. It is the latest Department of Justice (DOJ) Opinion Release, 12-02, which was dated October 18, 2012 but was not released publicly until last week. In 12-02 certain Requestors, which were 19 non-profit adoption agencies located in the US, asked the DOJ about bringing certain foreign governmental officials involved in the foreign country’s adoption process to the US. All the foreign governmental officials are involved in the process of allowing children from their country go through the adoption process with the US non-profits involved. The trips to the US will be for two days of meetings.

In this Opinion Release, the DOJ opined on a question regarding the payment for travel of these foreign governmental officials and whether the proposed trip would violate the Foreign Corrupt Practices Act (FCPA).

The Opinion Release set out the representations made by the Requestors to the DOJ which formed the basis for its decision. The Requestors stated that they would pay for the following:

The DOJ also noted the Requestors spending on meals and hotels would not exceed the rate set by the US General Services Administration for US government employees traveling within the US. The Requestors also made the following presentations which are consistent with prior DOJ guidance on travel, meals and entertainment.

So while poor Larry Talbot was doomed to run afoul of the laws of man when he became the Wolfman, you need not have the same result under your compliance program. I believe that Opinion Release 12-02 shows once again that if you have a compliance question or concern, the Opinion Release procedure is available to you to ask the DOJ if your proposed activity would violate the FCPA. But more than simply showing the procedure, I think that the DOJ once again shows how a reasoned approach, laid out in a rational manner, will be seriously considered, reviewed and can lead to a favorable result. Even the question of business class airfare can be handled in reasoned approach as shown by this Opinion Release. I disagree with the FCPA Professor in that there is a “high level of anxiety and skittishness in this current era of FCPA enforcement out there” because, as this Opinion Release shows you need not fear FCPA enforcement, even when the wolfsbane blooms, and the autumn moon is bright.

I hope that you have enjoyed this series of posts using the Universal Pictures classic monsters films as starting points for the discussion of compliance issues. I certainly have enjoyed writing about them and watching them yet again. A special thanks to my wife Michele for sitting through yet another October viewing of these movies. If you did enjoy these posts and want to see the best versions of these movies currently available, you should check out the Universal Classic Monsters: The Essential Collection [Blu-ray].

What is your FCPA Investigation Protocol?

Naval Theorists and the Measurement of Compliance