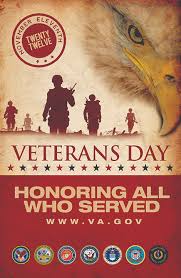 On the 11th minute of the 11th day of the 11th month in 1918, the War to End all Wars ended. While this ending did not accomplish that stated purpose, since that day we have honored all those persons who served in our Armed Forces. As you know Mary Jones has been posting for me over the past week when I had surgery and will continue to do so while am now recuperating. I wanted to thank everyone for their good wishes and I am doing as well as can be expected.

My surgery was performed on Election Day and it was not until the next day I was cognizant enough to ask a Nurse who won the election. Later that day, while still in ICU, I had an interesting conversation with another Nurse, who was from Nigeria, about our freedoms in America and that led me think about some of the things we owe all of our Veterans. I asked this Nurse what he thought about all the negative campaigning and accusations which flew back and forth; as opposed to some type of reasoned debate. He just looked at me and said “Do you know what I would have given back at home to be able to hear those things, or even say them.” The look in his eye reminded me that once again our right to vote, debate in public and otherwise engage in a free flowing dialogue about the future and destiny of our country is a freedom not held in other parts of the world, even in a country which, on paper at least, is a democracy.

I once had the rare privilege of trying a lawsuit in Hidalgo County, Texas, for 6 weeks. It was not a place friendly to defendants or corporations. One of the things I will never forget is the trial judge, Frank Evans, telling the jury panel about their rights and obligations as citizens to sit as jurors, and his comments were related to a Veteran. The Veteran was Harlon Block and he was one of the six men who raised the US Flag on Mount Suribachi on February 23, 1945. His name was enshrined outside the County Courthouse, along with the names of all other residents of Hidalgo County who have died serving our country from the Civil War to the present day. Harlon Block grew up in Weslaco, Texas, and played football at Weslaco High School. In February 1943, the entire team, consisting of 13 members, enlisted in the armed forces on the same day. Two years later, Block was one of the six men who made up one of the most iconic photos which came out of World War II and then he was killed while fighting on Iwo Jima.

The Judge who told this story was also one of those 13 boys. He told this story so that all of us might understand what it took for people to have the right to sit on a jury and judge their peers, whether in the criminal or civil context. As a trial lawyer, I think that one of our greatest freedoms is that of the Seventh Amendment which reads:

In suits at common law, where the value in controversy shall exceed twenty dollars, the right of trial by jury shall be preserved, and no fact tried by a jury shall be otherwise reexamined in any court of the United States, than according to the rules of the common law.

I believe that this right to a trial by jury speaks to several rights but one of those is that, in the civil context, an aggrieved party gets to tell his or her story to an independent third party. This is a powerful catharsis for any injured person. But more than getting to simply tell their story they will be judged by a process which is fair and open, through the rules of procedure and evidence. I believe it is this concept that is important for compliance. There must be a way for persons to tell (or report) stories which concern them regarding bribery and corruption. Companies must allow employees to use a helpline, report concerns or even whistle blow internally without disparagement or attacking them in public. Because if companies do not allow such a mechanism a whistleblower can go straight to the Securities and Exchange Commission (SEC) and sign up for a bounty.

However, I think that there is another compelling reason that Amendment VII is so important and how it applies directly to compliance. I call it “the light of day”. By allowing ordinary citizens to not only see but participate in the judicial process, it gives greater credibility to the entire process itself. I still think about the scene from ‘On The Waterfront’ where Terry, played by Marlon Brando, calls out to Johnny Friendly, played by Lee J. Cobb, to tell him that where he is standing “in the light of day” is a much better place to be than hiding in the shadows. Today we call that ‘transparency’ and this is something that you must have in your compliance program. Employees must see that those who make internal whistleblower reports are not attacked, demeaned or marginalized. US society is better because of both sides of Amendment VII, those being the protection for and the participation of its citizens in the judicial process. I would posit to you that transparency extends to internal reporting systems which allow employees to express concerns regarding compliance issues without fear of retaliation.

So today I want to thank all the Veterans in my family. To my Father; to Uncle John and Uncle Alvan and to my Father-in-Law Michael Rudland, who served in the British Navy and helped keep my wife’s mother country safe for its Queen and Country. A big and most heartfelt thank you to all.

And for the rest of you, if you know a Veteran, buy them a cup of coffee today or call them up and say thanks. If you see one, tell him or her thanks. Our country just showed why it is the greatest in the world by having a free election; take some time to celebrate what the men and women in our armed forces have done for us.

Compliance into the Weeds-Episode 58, Compliance Lessons from the Weinstein Scandal