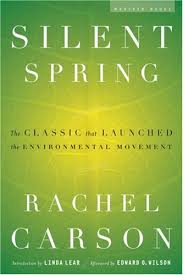 One of the constant tensions in any corporate compliance department or legal department is when to exercise leadership. While many corporate executives fall into the “lawyers are better seen than heard from” camp there are times when we must say ‘No’. While Mike Volkov continually sounds the horn against compliance practitioners becoming ‘Dr. No’ to which I would add inhabiting ‘the Land of No’ it’s a component of the job. The question is twofold; when to say no and how to say no.

This year is the 50th anniversary of the publication of Rachael Carson’s seminal and transformative work “Silent Spring” which in many ways directly led to the modern environmental movement. Rachael Carson’s “life shows that individual agency, fueled by resolution and hard work, has the power to change the world.” The first Earth Day, on April 22, 1970; the creation of the Environmental Protection Agency (EPA), which began operations in 1972; the banning of the use of the pesticide DDT in the United States and the enactment of both the Clean Water Act in 1972 and the Endangered Species Act in 1973; all of which began with Carson’s book.

I thought about this question of when and how to say no when reading a recent article in the New York Times (NYT) by Nancy Cohen, entitled “From Calm Leadership, Last Change. In this piece Cohen looked at the life of Rachael Carson, her seminal work “Silent Spring” and leadership. Silent Spring was on the seminal works that I read during college. I was absolutely overwhelmed by the wealth of information and data that Carson packed into her book. While I had some sense of the importance of the book as one of the first on what we now call environmentalism, at that time I was not aware that the book and Carson played a central role in starting the environmental movement, by forcing government and businesses to confront the dangers of pesticides.

What are the compliance leadership lessons that Carson’s experience demonstrate? Cohen initially noted that “As a professor at Harvard Business School, I encountered the great depth of her work when I was creating a course on the history of leadership.”
Cohen learned that Carson wrote “Silent Spring” as she battled breast cancer and after her niece died cared for her young child. Additionally, while “Unmarried and living in Silver Spring, Md., she also cared for and financially supported her ailing mother.” More importantly, after the book was published, Carson “faced an outburst of public reaction and a backlash from chemical companies. Yet throughout her personal and public struggles, she was an informed spokeswoman for environmental responsibility.”

Cohen gave three topical examples of Carson’s leadership which I believe are important for the compliance practitioner which speak to the question of ‘how’ to say ‘No’ when required to do so. The first is the importance of persistence in pursuing an objective. Business executives are usually struck by the ability to stay focused on goals in the face of obstacles.

Second, Cohen wrote about “the importance of doing thorough research and taking the long view. This means more than simply knowing the facts but also an understanding of history and culture are essential to understanding what is at stake in difficult and uncertain situations.” Cohen believes that this has the advantage of conferring “a sense of authority on the person who has acquired this knowledge.” In the compliance arena, this means more than simply understanding the obligations under the relevant anti-corruption and anti-bribery laws which apply to your company, such as the Foreign Corrupt Practices Act (FCPA) or UK Bribery Act, but applying them in jurisdictions across the globe.

The third lesson that Cohen writes about is that “the juggling of personal demands and professional ambitions in dealing with obligations to others while following professional drive. Carson’s story shows that times of great productivity can be followed by fallow periods when ambitions must be put aside for personal reasons.”

In addition to these three, others lessons can be drawn from Carson’s work. As noted by Cohen, Carson’s “life shows that individual agency, fueled by resolution and hard work, has the power to change the world.” For the compliance practitioner it is that leadership can come in all forms, in all shapes and sizes, even in an introvert. While most people assert leadership with traits such as charisma and aggressive, Cohen quoted Susan Cain, author of “Quiet: The Power of Introverts in a World That Can’t Stop Talking”, for the proposition that leadership can come in less obvious forms.

Leadership does not always come from the alphas of the world but sometimes from the introverts. The world might have been very different today if this most soft-spoken woman had not been so determined. As compliance practitioners we can not only draw inspiration from Rachael Carson’s work but leadership lessons as well.

Structural Compliance and Cultural Ethical Change in an Organization

Jim Langer, the Undefeated Dolphins and in the Trenches of Compliance