It’s the end of the world as we know it.

It’s the end of the world as we know it.

It’s the end of the world as we know it and I feel fine. 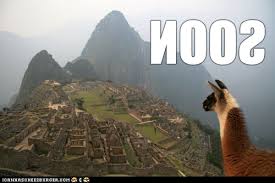 Today the Mayans predicted the world would end. I must say that I find the Mayans had a complete lack of courtesy, indeed if not foresight, as they did not identify the time the world would end and further did not specify if the time not indicated would be GMT or some other time zone. I would note for the record that for anyone who went to college in the 1980s, the R.E.M. version may be more prescient – “It’s the End of the World as We Know It (And I Feel Fine)” and I actually feel pretty good today, and thanks for asking. Finally, for all you conspiracy theorists out there, you might recall that, in the final episode of the X-Files, the Cigarette-Smoking Man predicted the end of the in 2012, although with even less courtesy than the Mayans, he did not give us any date. So if you are reading this blog it means that the world has not yet ended. If you are not reading it, I hope you enjoyed the rapture.

While the Mayans may have believed that the apocalypse was coming down as we neared the end of 2012, there may well be other events which have a more contemporary meaning for us. Exhibit A is the article in the Wednesday Wall Street Journal (WSJ), entitled “A Banker’s Costly Cab Ride”, in which reporter Aaron Lucchetti detailed the woes which have befallen the former Morgan Stanley employee William Bryan Jennings who got into a dispute with a cab driver over a fare during the holiday season in the pre-apocalypse year of 2011. The dispute got so heated that Jennings pulled a pen knife on the cab driver and cut him so that the driver required stitches. Police filed and later dropped charges against Jennings but Morgan Stanley fired him in October of this year, before there was a final determination that the charges would be dropped.

Jennings, a 22 year veteran of the company, was fired for breaching the Company’s Code of Conduct, which was reported to read in part “We promote a culture of integrity by taking personal responsibility for our actions, making the right decisions and being accountable.” The Code further specifies, “…If you violate the Code or other Morgan Stanley policy or procedure, you will be subject to the full range of disciplinary sanctions, including termination of your employment.” In addition to summarily firing him, the WSJ article reported “Morgan Stanley refused to give him a deferred-compensation payment in June and has frozen as much as $5 million or more…” Ouch!

In our continuing look at “Banks Behaving Badly” Exhibit B is the report by Bloomberg News regarding the HSBC $1.9 billion settlement with the US Department of Justice (DOJ) to resolve its anti-money laundering violations. In an article entitled “HSBC Judge Requests Reasons to Approve Drug-Money Accord” it is reported that the Judge, who will pass upon the settlement with HSBC, has asked the parties “to submit a brief giving reasons he should approve the bank’s $1.9 billion settlement of money-laundering charges over drug cartel-related transfers.” The Judge was quoted as saying, “My suggestion is you present to the court a document that demonstrates why I should accept the agreement” and “There’s been some publicized criticism of this. I think you should feel free to address it.” With all the criticism of the settlement and its no criminal penalties perhaps he wants to know the same thing as Halah Touryalai, who asked in an article entitled “Final Thought On HSBC Settlement: How Much Bad Behavior Will We Tolerate?”, “What’s a bank got to do to get into some real trouble around here?” She then added, “The scary part about the HSBC settlement is that U.S. authorities are essentially saying they couldn’t act on criminal charges because it would harm the larger financial system. That’s got many calling HSBC (and potentially others) too-big-to-jail.”

Exhibit C is the article today in the WSJ by Chris Matthews entitled, “Judge Won’t Approve IBM, SEC Bribery Settlement”. In it he reported that the District Judge, in whose court the SEC filed its agreed to settlement with IBM for FCPA violation, refused to accept the agreed upon settlement. Judge Leon, the trial judge in the Gun Sting cases, was reported to have said he, “couldn’t approve the settlement unless the SEC and IBM agreed to abide by additional settlement terms imposed by the court or explain why the terms are too burdensome.” IBM’s counsel argued that certain of the Judge’s conditions were too burdensome and these included, that “that IBM must report to the court and the SEC annually on its efforts to comply with the FCPA, report any future violations of the FCPA, and report any new criminal or civil investigations.” Matthews wrote that “IBM said it was willing to report future improper payments, and books and records violations related to such payments, but was unable to report broader accounting inaccuracies that weren’t tied to improper payments.” Judge Leon asked “So if they learn about other FCPA violations, they get a pass on that?” He also “pressed lawyers for the SEC and IBM about what data they had to prove reporting FCPA books and records violations would be burdensome and wondered aloud why “one of the largest companies in the world” couldn’t track that.” Burdensome indeed.

So if the world does not end today, I hope that you have (or will) enjoy the shortest day of the year. As this will be my final post before Christmas, a Merry Christmas to all. I submit for your holiday enjoyment what I consider to be the greatest Christmas and holiday song of all-time, Nat King Cole singing “The Christmas Song”.

UTStarcom and Gifts and Entertainment Under the FCPA

Soft Skills in Remediation: Part I – The Gatekeepers