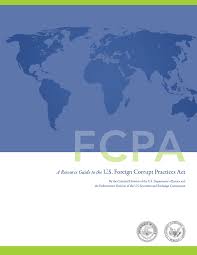 I have previously written about my belief that the US Department of Justice (DOJ) should go further in releasing information about Declinations to Prosecute Foreign Corrupt Practices Act (FCPA) cases self-reported to both it and the Securities and Exchange Commission (SEC). The FCPA Professor, Mike Volkov and others have also written and advocated that the DOJ should release information about Declinations because they are an excellent source of information for the compliance practitioner about the DOJ’s thinking on FCPA enforcement issues.

In a piece I wrote for the Washington Legal Foundation, entitled “DOJ Should Release FCPA Declination Opinions”, I stated that “In an area like Foreign Corrupt Practice Act (FCPA) enforcement, where guiding case law is largely non-existent, compliance practitioners must rely on the actions and decisions of federal enforcement agencies for information. Such information is available in the form of enforcement actions, the release of Deferred Prosecution Agreements (DPAs) and Non-Prosecution Agreements (NPAs), and hypothetical fact patterns presented to the Department of Justice (DOJ) through its Opinion Release procedure. But one highly valuable source of guidance has been kept from regulated entities and their counsels: DOJ and Securities and Exchange Commission (SEC) “declination” decisions, opinions which are drafted when the agencies decline to prosecute an individual or organization. A change is needed in this counterproductive policy. The release of substantive information on declinations would help foster greater compliance with the FCPA by providing practitioners with specific facts of circumstances where investigations did not result in an enforcement action.”

This request for such information was provided in the recently released document “A Resource Guide to the US Foreign Corrupt Practices Act” by the DOJ and SEC. In it presented six recent matters that the “DOJ and SEC declined to pursue.” I have set them out in full because I believe that they provide solid information for the compliance practitioner.

DOJ and SEC declined to take enforcement action against a U.S. publicly held consumer products company in connection with its acquisition of a foreign company. Factors taken into consideration included:

In 2011, DOJ declined to take prosecutorial action against a privately held U.S. company and its foreign subsidiary. Factors taken into consideration included:

From these six examples, I believe that there are some common elements that the compliance practitioner can draw upon, which I expand on below:

So I applaud the DOJ for releasing this information on Declinations. I have written that I believe the DOJ Declination given to Morgan Stanley was the most important FCPA (non) enforcement action of 2012. While the Guidance may be a more significant overall FCPA event because of its wider focus and reach, the inclusion of these six declinations continues to provide solid information to compliance practitioners to use in creating or evaluating their compliance programs. I ended my piece for the Washington Legal Foundation with the following, “In the declination process, DOJ is handling a much broader and more significant amount of information. A self-disclosing company has investigated or will investigate a matter, most likely with the aid of specialized outside FCPA investigative counsel. DOJ has the opportunity to review the investigation and suggest further or other lines of inquiry. Company personnel are made available for DOJ interviews, if appropriate. In short one would have actual facts and detailed oversight by DOJ, which in the case of a declination to prosecute, would provide substantive guidance on why it did not believe a FCPA violation had occurred in the face of a company’s good faith belief that it had violated the FCPA.”

I believe that this is still true.

The US Supreme Court today, denied the Petition for Writ filed by ICE that I wrote about last week. It now appears that ICE’s efforts to intervene under the Crime Victims’ Rights Act in the DOJ settlement with Alcatel-Lucent are at an end.

Procurement Pressure: The Convergence Of Supply And Compliance

The End is Nigh? MLB and Fairness in Administration of a FCPA Compliance Program