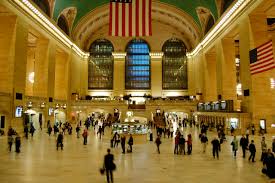 Last week we celebrated one of the world’s great urban architectural marvels, the London Underground. This week we celebrate one a little closer to home. This week is the 100th anniversary of Grand Central Station. In an article this week in the New York Times, (NYT), entitled “Looking Out on the Grand Central, and Looking Back on Saving It”, reporter Clyde Haberman interviewed Kent L. Barwick, former Executive Director of the Municipal Art Society, who was instrumental in the fight to save the Station in the 1970s. I knew about the legal fight that the City of New York had put up after its designation of the venerable landmark had been overturned by a state judge. This landmark case went all the way to the US Supreme Court and ended with a victory for the City of New York and the establishment of the right of a municipality to protect the public environment and its history by historic designation. What I did not know about this process was that one of its most active supporters was Jacqueline Kennedy Onassis, who supported the cause with time, money and effort. It was a classic effort of several processes moving forward on several fronts at once which led to this important legal decision and one of the most compelling journeys in landmark preservation.

This article came to mind when I read another article in the NYT, entitled “Make Them Pay (and Confess)” by reporter Gretchen Morgenson, about President Obama’s nomination of Mary Jo White to head the Securities and Exchange Commission (SEC). Morgenson used the nomination of White to argue that the SEC has not been aggressive enough in its prosecution of financial wrongdoing during the first four years of the Obama Administration. She believes that the no-admission settlement is merely a “slap on the wrist” for companies who are guilty of securities violations involving fraud. I believe that this would include Foreign Corrupt Practices Act (FCPA) violations.

One of the techniques that she argues should be used more often and would have greater impact is requiring companies to admit to facts in settlement agreements. As most compliance practitioners know, the SEC has, in the past, allowed companies to settle without admitting or denying the findings which are the basis for the enforcement actions. Generally the SEC has supported this position arguing that by doing so this helps it “avoid costly, time-consuming litigation that would tax already-stretched resources.” In addition to time-consuming trials, there is always the possibility that the SEC could lose at trial. Further, by having quicker settlements, more victims would be getting restitution faster.

But Morgenson argues that a no-admission settlement does not really qualify as a punishment. In addition to having no precedential value going forward, because there are no facts admitted, she maintains that even the financial penalties are meaningless. This is because ultimately the fines and penalties are paid by the shareholders or the company’s insurance carrier. Such situations are “not much of a deterrent.”

Morgenson points out that Preet Bharara, the United States Attorney for the Southern District of New York, who was hired by Mrs. White when she ran the office, “has made it a priority to require admissions from defendants in civil fraud cases” brought by his office. Bharara has stated that “Such admissions are a way to hold defendants accountable, as well as being an important part of the public record.” By public record, Bharara means that plaintiffs can then use those admissions in shareholder derivative actions against corporations in tag along law suits. Do you think that the plaintiffs’ bar will be salivating over that prospect?

Morgenson discussed several reasons for the reluctance of the SEC to require such admissions of fact. The first and foremost is that you have to be ready, willing and able to go to trial. Bharara handles this in the Southern District with the following comment, “We’re not in the business of bluffing. When people know you’re not bluffing, they come to the table.” However, the SEC itself may not have this same attitude. Morgenson notes that “It won’t be easy to change the mind-set at the S.E.C. from one that regularly allows defendants to avoid culpability.” Other federal agencies such as the Federal Trade Commission also allow corporations to settle civil enforcement actions while not admitting to any facts.

Morgenson acknowledges that it will not be easy for the SEC to change its philosophy. Further, defendants will probably fight this change tooth and nail because they know that the cost of any settlement will increase exponentially if they make such admissions. The aforementioned plaintiffs’ bar will be waiting to jump on any corporations which make such settlements. Morgenson quotes William F. Gavin, Secretary of the commonwealth of Massachusetts and its securities regulator, who admitted that negotiating admissions of liability is challenging due to the fact that the cost of settlements will go up. His response, “Well, that’s kind of the idea – you did something wrong, you should be liable. You’re not going to change practices or behavior if there’s no penalty associated with it.”

Federal judges have also begun to question the use of SEC no-admission settlements. There is the quite well known example of Judge Rakoff and his initial rejection of the Citigroup settlement. A couple of other federal judges also initially rejected no-admission settlements but did so on the grounds that there was not enough evidence to enforce an injunction if there was a breach of the settlement by the defendant. Their concerns were addressed and they all eventually signed off on the SEC settlements. Now, however, Judge Richard Leon has rejected a SEC settlement with IBM, for FCPA books and records violations, as Judge Leon wanted IBM to report to the SEC if it sustained a FCPA violation going forward. IBM, with the SEC standing at its side on this point, said that to do so would be “too burdensome.” Judge Leon has set a hearing date of February 4, 2013 for IBM to present evidence of how they plan to collect the data to show that it is too burdensome. If IBM cannot do so, Judge Leon may well not approve the no-admission settlement.

Morgenson clearly wants Mary Jo White to engage in more and greater enforcement of financial fraud cases. She does not speak to FCPA cases specifically so it is not clear on whether her desire would also include FCPA books and records enforcement actions brought by the SEC when there is no criminal case brought by the Department of Justice (DOJ). However, if no-admission enforcement actions are no longer the norm in SEC financial fraud or other securities actions, this will probably also bleed over into FCPA actions. Judge Leon’s challenge to IBM and to the SEC may also portend an increasingly active judiciary which may delve into the substance of any FCPA settlement agreement with the SEC.

So for you New Yorkers out there, or any of you travelling through New York, I would suggest that the next time that you go through Grand Central Station look up with some wonder and awe at one of the true architectural marvels of the city. You may not do so as I did the first time I went through it but still take a few minutes to think that it was headed for the wrecking ball back in the 1970s, scheduled to be replaced by a skyscraper. Morgenson argues that the SEC should become more aggressive in its prosecution of financial fraud and with her prosecutorial background the agency may well be headed that way.