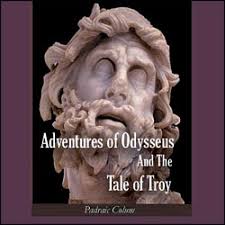 Who is your favorite character from the Iliad? Is it Agamemnon the king who brings the Greek Armada to Troy for his brother’s honor; perhaps Ajax the mountain of a man who is the most loyal Greek warrior; how about Achilles the warrior who single-handedly destroys more Trojans than any Greek; or perchance Nestor the wise old counselor who tries to keep the Greeks united in the face of ten years of war? Perhaps your taste runs to the Trojan characters, Priam, the leader of Troy, Paris, now husband of the most beautiful woman on earth, or Hector, the stalwart son of Priam who dies in a duel with Achilles. In the Iliad, my money is on Odysseus, who is a king like Agamemnon and Priam; a shrewd advisor like Nestor; and a great warrior like Ajax, Achilles and Hector. Lastly, he has, if not the most beautiful wife in the world, certainly the most loyal in Penelope.

On December 17, 2012, the Securities and Exchange Commission (SEC) entered into an agreed Cease and Desist Order (Order) with Allianz SE regarding violations of the Foreign Corrupt Practices Act (FCPA). Much like Odysseus, this Order provides several different types of information for the compliance practitioner to digest. This post will work through some of the information and point out to you the lessons which can be drawn from this enforcement action.

The company is in the insurance business, writing lines including property and casualty, life, and health insurance and also is in asset management. Initially it is to be noted that the FCPA violations involve a subsidiary Allianz created to do business in Indonesia, PT Asuransi Allianz Utama Indonesia Ltd (Utama), through which the illegal payments were made. Allianz was the majority owner of this entity and Utama’s financial reporting was rolled up into the parent’s books and records. The Order reported that Utama secured at least 295 Indonesian government contracts through improper payments of approximately $650,626. From these improper payments, Allianz “realized $5,315,649 in profits.”

While the company is headquartered in Munich, Germany, from November 3, 2000 to October 23, 2009, Allianz’s American Depositary Shares and bonds were registered with the Commission pursuant to Section 12(b) of the Exchange Act and traded on the New York Stock Exchange (“NYSE”). This made Allianz an “issuer” within the meaning of the FCPA and therefore subject to the Act. The conduct at issue occurred when Allianz was a US issuer. Interestingly, in 2009, Allianz voluntarily delisted its securities from the New York Stock Exchange (NYSE).

Due to an internal whistleblower and subsequent investigation which will be discussed later, this original bribery scheme was modified in 2005; that is after completion of payments to Indonesian government officials who were owed bribes for insurance products purchased previously, up through 2008. Thereafter, Utama employed a variety of methods to make illegal and improper payments to Indonesian government officials. These methods included “1) booking commissions to an agent that was not associated with the account for the government insurance contract and then withdrawing the funds booked to the agent’s account as cash to pay the foreign official; or 2) overstating the amount of a client’s insurance premium, booking the excess amount to an unallocated account and then “reimbursing” the excess funds to the foreign officials, who were responsible for procuring the government insurance contracts.”

In 2009, the company’s outside auditor “received an anonymous complaint alleging that an Allianz executive created or initiated slush funds during his tenure with AZAP.” In response to this complaint the company created “a Whistleblower Committee to do an internal investigation and retained counsel to conduct an internal investigation of Utama’s payment practices in Indonesia.” However, Allianz did not self-report either the allegations of improper payments or the results of its internal investigations to the SEC or Department of Justice (DOJ). In 2010, the SEC opened an investigation after receiving “an anonymous complaint of possible FCPA violations.” After some initial delay in the timeliness in reporting to the SEC, the company began cooperation with the SEC and began remedial efforts.

There are several lessons which can be learned from the Allianz enforcement action. The first and foremost is jurisdiction. Simply because you are a foreign based company, do not think you are shielded from FCPA enforcement actions. Foreign companies need to review their US listings to determine if they have inadvertently subjected themselves to FCPA jurisdiction. In Allianz’s situation its American Depositary Shares and bonds were registered with the SEC. That is enough for jurisdiction. So if you are sitting across the Atlantic or Pacific or north or south of the border and have some American interests, holdings or anything else that you own or are a part of the US, you had better get your FCPA compliance house in order.

There is a wealth of information that internal auditors can use from this enforcement action. The first and foremost is that when you turn a rock over and look under it there may well be several things that show up under the light of day. If you are tasked with trying to find one scheme, such as embezzlement and find indicia of another, for example bribery and corruption of foreign government officials, it is in the interest of both you and your company to keep looking. If substantive information comes to a company in any manner, the company has a duty to investigate it and not to bury its collective head in the sand.

The bribery schemes used by Utama are also instructive. Initially, they give internal audit and anyone else looking for that matter, clear red flags to investigate further. If there is a “special purpose fund” of any type, the reason for the fund and justifications for payments out of it, thorough review of backup documentation is mandatory for your review. Additionally, there should be a review of the commissions paid. It is easy enough to do; match up the commission paid with the contract for which it is due under, coupled with the work done by the agent who is alleged to be owed the commission. You should also review the amount of commission paid to ascertain if it is within a reasonable range.

Internal controls must also not only be reviewed but additional monitoring and auditing should be put in place to make sure that any recommendations made are followed. Here Utama was told to close the Agent special purpose account in 2005 but not only did they fail to do so they continued to pay bribes out of it into 2008. Apparently no one at Allianz thought they should follow up to see if the instruction to close the Agent special purpose account was followed.

We started this blog with the question of who was your favorite hero from the Iliad. My favorite is Odysseus. He is the only Greek hero who combines all of the traits I listed in the opening paragraph. I think that the Allianz FCPA enforcement action is similar because there are many different lessons which can be learned. The DOJ and SEC consistently put out solid information that the compliance practitioner can use to evaluate and assess a compliance program or to manage specific risks. You do not have to read the tea leaves or try to go to the Oracle of Delphi to understand what the DOJ and SEC expect in the way of FCPA compliance. The Allianz SEC enforcement action continues this tradition.

Dreamboat Annie and Fostering a Culture of Compliance

Tales from the Crypt: Rule 3-Appearances Matter and May We Have the Envelope, Please.….Part I