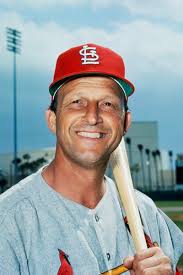 Today we honor Stan ‘The Man’ Musial who played 22 seasons for the St. Louis Cardinals (1941–1963) who passed away on Saturday. Musial was a record 24-time All-Star selection and is widely considered to be one of the greatest hitters in baseball history. He compiled 3,630 hits  He also amassed 475 home runs during his career, was named the National League‘s Most Valuable Player (MVP) three times and won three World Series championship titles. Musial was a first-ballot inductee to the Baseball Hall of Fame in 1969. I actually got to see Musial play at the old Colt Stadium, where the Houston Colt 45’s played in before the Astrodome was built and before they became the Astros. My father, who grew up in Tulsa listening to the St. Louis Cardinals and so passed on his passion for the Cards to me. We could even listen to the Cardinals on the radio in Houston as the uber-powerful AM station KMOX broadcast throughout the Midwest and South. Because of this anomaly I am still a fan of baseball on the radio. So today we celebrate one of the very greatest baseball players of all-time.

In the 60s I was given a long-playing album about hitting in which Musial narrated. It came with a book which you were to turn the pages while Stan The Man taught you how to hit. While it might have talked about his unique corkscrew stance, phenomenal eye-hand coordination or bat level when swinging at an off-speed pitch the one thing I have remembered throughout the years was practice and practice and practice. That is how Musial became one of the greatest hitters of all-time.

I was reminded about this when I read an article in this month’s Inc. magazine and entitled “The Rules” by authors Adam Bluestein, Leigh Buchanan, Issie Lapowsky and Eric Schurenberg. In the article the authors interviewed some of the world’s top entrepreneurs “as well as thinkers from business schools to come up with 11 nuggets of hard-earned wisdom and meticulously researched insight” or as the magazine’s cover promised “11 Rules for Success”. I believe that they are a good review for any Chief Compliance Officer (CCO) and present an entrepreneurial way to think about an overall best practices compliance program.

The Inc. article provided some interesting insights into what made some of the world’s top entrepreneurs very successful. You might see how these insights could help you improve your compliance program. And while it doesn’t have quite the same rhyming scheme as Paul Simon’s Mrs. Robinson, here’s to you Stan ‘The Man’ Musial. I hope that you enjoy an inning or two at the great game in the hereafter.

Tom, I to grew up listening to the Cardinals on the radio, only Major league team we could get the broadcast from in Southern Oklahoma. My first baseball bat was Stan Musial bat. Well written with alot of content to read several times to get it all. Thanks.