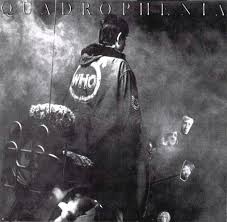 This past weekend I saw the remaining members of The Who perform in their Quadrophenia Tour. While I had seen Roger Daltry perform the rock opera Tommy, I had never seen Pete Townsend in concert. To say I was blown away would be putting it mildly, especially as Quadrophenia does not even make it into my top three favorite Who albums, which are, in descending order, Who’s Next, Tommy and Live at Leeds. While Roger Daltry’s voice was not as strong as it was during his Tommy tour, not doubt due to the longer duration of this tour, it was still a great performance and it was worth it to see Pete Townsend. He can still rock. Also they ended the show with three songs from Who’s Next, which alone was worth the price of admission.

The story generally revolves around four themes based upon the four personalities of the members of the band; Daltry, Townsend, Keith Moon and John Entwhistle. However, it was also a play on (for those of you old enough to remember) quadrophonic sound. According to Pete Townsend, “”The whole conception of Quadrophenia was geared to quadraphonic, but in a creative sort of way. I mean I wanted themes to sort of emerge from corners. So you start to get the sense of the fourness being literally speaker for speaker.” So inspired by ‘fourness’ today, I will review four issues that have, or will, impact the compliance practitioner.

In an article in the Financial Times (FT), entitled “EU refuses to bend on tough data privacy law”, reporter James Fontanella-Khan wrote that Viviane Reding, the EU Commissioner for Justice, said that she will continue to fight any US attempts to water down its proposed data protection and privacy law, “which would force global technology companies to obey European standards across the globe.” Further, “Exempting non-EU countries from our data protection regulations is not on the table. It would mean applying a double standard.” Fontanella-Khan said that “US tech companies argue that it would be unfair for them to be subject to EU laws that are too stringent and could result in expensive administrative burdens and hefty fines for errant companies.” Can you think of any US laws that non-US companies have to comply with?

Issues for the compliance practitioner? There could be a myriad, from internal investigations, to sharing data with US regulators to ongoing monitoring and auditing. While it is currently US technology companies which are leading the fight against these new tough standards, non-tech companies could do well to assess how these changes may well impact them.

Perhaps not fully appreciating the irony in reporting the EADS story in the same issue as the above EU data privacy story, the FT also had an article by Carola Hoyos, entitled “FBI probe of EADS unit claims”, who reported that the Federal Bureau of Investigation (FBI) has interviewed “a witness and taken possession of documents in connection with allegations” that a British subsidiary of the European aerospace entity EADS, named GPT Special Management Systems, bribed Saudi Arabian military officials, in connection with business dealings. Hoyos reported that GPT “made ₤11.5 of unexplained payments – some via the US – to bank accounts in the Cayman Islands.”

Although there is no known open US Department of Justice (DOJ) investigation open into the EADS matter at this point, Hoyos noted that it was the DOJ which led the effort to investigate and eventually fine the UK company BAE, the amount of $400MM after the British government ordered the Serious Fraud Office (SFO) inquiry into allegations of BAE bribery for sales of equipment into Saudi Arabia “citing economic and diplomatic interests”. The FBI interviews occurred even though the SFO is currently investigating the matter. Hoyos also reported that EADS “maintained that its own investigations into the matter had yielded no evidence of wrongdoing.”

In a post in his blog, the D&O Diary, entitled “Damning E-mails: Can We Talk?”, author Kevin LaCroix wrote that “revelations this past week arguably represent some type of high-water mark, as a cluster of serious allegations were accompanied by a trove of embarrassing excerpts from emails and instant messages. While the latest disclosures provide yet another reminder of the dangers associated with ill-considered use of modern electronic communications technology, they also raise questions about the use that regulators and claimants are attempting to make of the communications.” He was talking about the Commodities Futures Trading Commission’s press releases announcing RBS’s settlement this past week of charges of alleged Libor manipulation drew heavily on excerpts from the bank’s internal electronic communications. While noting that “emails do sometimes in fact evidence wrongdoing” the problem with them “is that when seemingly damning email excerpts are blasted into the media, it is very difficult to appreciate the larger context within which the excerpts fit.”

As much as he has distaste for the selective use of emails in this manner by regulators, LaCroix believes that they can provide a teachable moment. He writes that “a useful exercise to try to adopt is to pause and ask yourself, before hitting “send”, how the message would look if it were to fall into the hands of a hostile and aggressive adversary who was looking for ways to try to make you or your company look bad. Were this simple test to be more widely implemented, we would certainly see a marked reduction in, for example, running email jokes about the French maid’s outfit. My final thought is this – we all know that many electronic messages are written in haste and sometimes with insufficient care. With full awareness of this attribute of electronic communications, we should hesitate to jump to too many conclusions about the seemingly damaging inferences that could be drawn from email or instant message excerpts. But we should also learn from the inferences that regulators and claimants are trying to draw and try to take that into account in our own communications.” I could not have put it better myself.

There have recently been a plethora of articles about ‘big data’ and how it can help in the monitoring of a Foreign Corrupt Practices Act (FCPA) compliance program. I have been one of the folks to write and talk about it. However, in an article in the New York Times (NYT), entitled “Sure, Big Data is Great. But So Is Intuition”, reporter Steve Lohr wrote that while he thinks that big data is a powerful tool and an unstoppable tread it “might be a time for reflection, questions and qualms about this technology.” This is because, like all mathematical models, big data is “a simplification.” He quotes Thomas Davenport for the following. “A major part of managing Big Data projects, he says, is asking the right questions: How do you define the problem? What data do you need? Where does it come from? What are the assumptions behind the model that the data is fed into? How is the model different from reality?”

So the underlying basis for analyzing big data may actually be “too simple minded, rather than too smart.” All of this leads back to intuition. I would add that if the hair on the back of your neck stands up, your gut tells you something is wrong or something does not smell right, it probably isn’t right. The implications for the compliance practitioner? I would like to propose that the largest is in the area of training. What I try and tell non-compliance practitioners when I put on training is that if you see, smell or sense one of the above, just raise your hand. You do not have to know the ins and outs of the FCPA or know the answer but I do ask that you raise your hand and get the issue to a person who does have the expertise to analyze the issue.

If you have the chance to see The Who on their Quadrophenia Tour, all I can say is to drop whatever you are doing and go see it. I do not know if it will be your last chance to see Pete Townsend but when he winds up for one of those trademark windmill slams down the guitar strings, just close your eyes and listen. It is pure bliss and a quad of sensations for the ages.

Remedies for Corruption – Lessons from the World of Track and Field