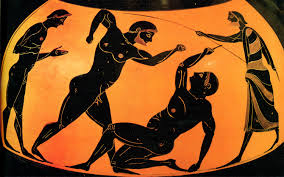 What do the US, Russia and the Islamic Republic of Iran have in common? Answer: Precious little. However one thing that they do have in common is their vehement opposition to the absolutely idiotic, boneheaded and stupid decision by the International Olympic Committee (IOC) to drop wrestling from the Olympic Games. Wrestling dates back to the ancient Greek Olympic Games and it is just inconceivable that the IOC would drop one of the very few sporting events that has endured for 2,500 years. If these three countries can agree on something, do you think that the IOC should listen?

What do the FCPA Professor, the US Chamber of Commerce and Tom Fox have in common when it comes to the Foreign Corrupt Practices Act (FCPA)? Answer: Not much. But one thing we do have in common is a belief that the Department of Justice (DOJ) and Securities and Exchange Commission (SEC) should release information regarding FCPA matters that it declines to prosecute. For my part, the reason that the DOJ/SEC should release this information is that it is a solid base of information that a compliance practitioner can use to help improve a FCPA based compliance program.

What is a Declination?

First, continuing the good faith debate as to what is a ‘declination’, I first need to provide my definition. Last week, the FCPA Professor wrote, in a post entitled “The Need For An FCPA Lingua Franca”, of his belief in the need for a clarification of precisely what is a declination. He wrote, “I am guided by my definition of a declination as being an instance in which an enforcement agency has concluded that it could bring a case, consistent with its burden of proof as to all necessary elements, yet decides not to pursue the action.” The Professor further states that “anything less ought not be termed a “declination” and noted that it is really no different that saying a police officer “declined” to issue a speeding ticket in an instance in which the driver was not speeding. This is not a declination, it is what the law commands, and such reasoning applies in the FCPA context as well.” The Professor also cited to a WilmerHale client release which discussed the DOJ/SEC FCPA Guidance and had the following line which relates to the definition of a declination, “It is also disappointing that some of the examples do not make clear that the conduct met each of the elements of a statutory violation, since the concept of a declination is supposed to be reserved for instances in which the offense is chargeable but the government declines in its own discretion to bring a case.”

What about situations other than self-disclosure, such those involving a whistle-blower, information which came from other companies in the same industry, such as those companies involved with  the freight forwarder Panalpina, or other situations where information comes to the DOJ/SEC and they eventually decide not prosecute. Marc Alain Bohn, writing a piece in the FCPA Blog entitled “Revisiting the Definition of ‘Declinations’”, said that “there are likely many considerations that inform an agency decision not to pursue a case. Given the agencies’ aggressive interpretations of the jurisdiction and knowledge elements of the FCPA—something the FCPA Professor has frequently drawn attention to it is likely rare that an agency’s decision not to pursue an enforcement action is based on its determination that there were insufficient facts to do so. This is particularly true in the case of issuers, against whom the agencies can more easily build FCPA-cases by focusing upon violations of the statute’s accounting provisions.” Because of these facts and other, Bohn urged a broader form of definition of declination than the FCPA Professor. Bohn gives the following definition, “I think it is appropriate to apply the short-hand label “declination” more broadly to each instance where the DOJ or SEC has notified a company that it does not intend to bring an enforcement action.”

The concept that the US Chamber of Commerce, the FCPA Professor and myself do agree on, is the need for the DOJ/SEC to publicize declinations. I have argued for some time that by publicizing declinations, it would provide great value to the compliance practitioner. I believe this to be particularly true in the situation where a company has self-disclosed what it believes to be evidence of a FCPA violation. I believed this before the Morgan Stanley declination was released last year and I believed this before the FCPA Guidance had a section discussing six matters that the DOJ/SEC had declined to prosecute. The two releases of declinations have only made my belief stronger regarding the usefulness of declinations to the compliance practitioners.

I outlined some of the reason I think that declinations can be such a useful tool, in an article for the Washington Legal Foundation, entitled “DOJ Should Release FCPA Declinations Opinions”. I wrote that this is because “The substantive portions of declinations, excised of company-specific information, would greatly increase FCPA enforcement transparency. This, in turn, would inspire greater FCPA compliance through a better understanding of how DOJ interprets the law with the specific facts presented to it.” Further, “In the declination process, DOJ is handling a much broader and more significant amount of information. A self-disclosing company has investigated or will investigate a matter, most likely with the aid of specialized outside FCPA investigative counsel. DOJ has the opportunity to review the investigation and suggest further or other lines of inquiry. Company personnel are made available for DOJ interviews, if appropriate. In short one would have actual facts and detailed oversight by DOJ, which in the case of a declination to prosecute, would provide substantive guidance on why it did not believe a FCPA violation had occurred in the face of a company’s good faith belief that it had violated the FCPA.”

From the Morgan Stanley declination we learned the importance of (1) annual FCPA training; (2) annual certification; (3) transaction monitoring; (4) compliance reminders; and (5) documentation of all of these factors. From the FCPA Guidance, we learned that the companies which received declinations had the following six factors:

We learned some very specific, useful pieces of information from the declinations that have been issued. I hope that more will be issued by the DOJ/SEC in the future. It appears that the sport of Olympic wrestling, the FCPA and politics can indeed make for some strange bedfellows.

This Week in FCPA-Epiosode 28 (Part II), the High Anxiety Edition

Joe Howell on the PCAOB, Audits and Compliance – Part IV

The Alchemist of Comedy and Utility Industry Compliance