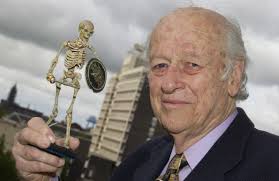 Ray Harryhausen died yesterday. For my money, he was the greatest special effects artist of the 20th century. I absolutely loved his stop motion animation. He began his career working under Willis O’Brien on the original King Kong. However he went on to surpass O’Brien by developing what the New York Times said was the process Harryhausen called “Dynamation. It involved photographing a miniature — of a dinosaur, say — against a rear-projection screen through a partly masked pane of glass. The masked portion would then be re-exposed to insert foreground elements from the live footage. The effect was to make the creature appear to move in the midst of live action. It could now be seen walking behind a live tree, or be viewed in the middle distance over the shoulder of a live actor — effects difficult to achieve before.” If you want to see real special effects, check out the Jason and his crew sword fighting against the raised-from-the-dead skeletons in Jason and the Argonauts.

We saw some very different ‘special effects’ for the UK listed company Eurasian Natural Resources Corp (ENRC) in the month of April. As reported in the UK Telegraph, the title of the April 30 piece says it all – “ENRC’s annual report is full of laughs – for all the wrong reasons”, reporter Alistair Osborne says that the worldwide mining conglomerate’s value “has been disappearing down the mineshaft.” While all of the company’s economic metrics were headed downward, the company’s chairman, Mehmet Dalman declared “The primary focus for 2013 will be to maximise shareholder value through the implementation of our strategic priorities.” Unfortunately, Chairman Dalman wrote this statement before he resigned as company chairman.

What was it that led to this resignation? It may be something related to an announcement by the UK Serious Fraud Office (SFO) that it “has launched a criminal investigation into Eurasian Natural Resources Corporation (ENRC) amid allegations of fraud, bribery and corruption”. In an article, entitled “SFO launches criminal investigation into ENRC”, it states the “SFO has confirmed that it has taken over an internal investigation by the mining giant into allegations made by a whistleblower relating to its operations in Africa and Kazakhstan.”

According to an article in the Financial Times (FT), entitled “ENRC looks to dig itself out of a hole”, some of these allegations in Africa related to claims that the company became involved in deals in the Congo and with transactions involving its President, Joseph Kabila. One of these transactions involved the purchase of mining rights in a project “outside the town of Kolwezi, which had been confiscated by the Congo government from the Toronto-listed miner First Quantum.” After legal action by the Canadian company, ENRC “settled with its rival for $1.25 bn.” The allegations of bribery and corruption in Kazakhstan relate to allegations of fraudulent payments at ENRC’s Kazakhstan unit Sokolovsko-Sarbai, known as SSGPO.

Unfortunately, ENRC seems to be stumbling over itself as it has investigated these whistleblower allegations. The first stumble was when ENRC dismissed its lead internal investigator, Alex Gaft. This individual dismissal came after ENRC dismissed the US law firm Dechert, which had headed up the external investigations of these allegations. This dismissal came after Dechert presented a preliminary report to the SFO, which the FT said “raised concerns over payments totalling at least $100m over four years.”

According to the FT,  Dechert received a Section 2a notice, immediately after being terminated, “and just weeks before a second report into ENRC’s business practices in Africa was due to be handed to the SFO, say people familiar with the investigation. The SFO uses Section 2a notices specifically to demand information at a pre-investigation stage when it suspects overseas bribery and corruption, its website says. Sending out such a notice to the law firm signalled that the SFO felt it could no longer depend on the information provided by the company alone. The SFO now has the job of investigating the African operations of ENRC, which recently hired ex-attorney general Lord Goldsmith as a legal adviser.”

To top off all of the above dismissals of investigators and investigating law firms, the ENRC representative who was overseeing the internal investigation was none other than Chairman Dalman, the same person who resigned his position last week. Now the SFO has taken over the investigation, which according to the FT means that it can “use its full criminal powers such as arrests, dawn raids and demands for documents.”

Thebriberyact.com guys have been telling us that the SFO is still out there and SFO enforcement cases are moving forward. When you have a lead internal investigator dismissed, external counsel let go and your own chairman heading an investigation all leave a public company within 30 days, it is bound to get the attention of regulators. I wonder if the Department of Justice may have noticed?