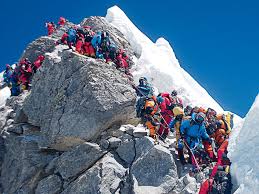 What is your compliance process? I thought about that question when I read an article in this month’s National Geographic Magazine entitled “Maxed Out on Everest” by Mark Jenkins. Jenkins wrote about the more raw numbers of persons who are challenged to climb the world’s tallest peak. This has led to more-than 200 person waiting lines to get through certain pinch points, two hour waits which can become deadly, and literally tons of trash left from climbing teams which now stand testament to the environmental effects of these expeditions. Jenkins gave his list of six prescriptions to address these and other issues. They were (1) fewer climbing permits, (2) small ascent teams, (3) require certification of outfitters, (4) require experience to climb the mountain, (5) leave no trace of human waste and garbage on the mountain and (6) remove dead bodies from the mountain.

The first NYT article, entitled “Documents Show Obama Officials in Tension Over British Banks”, by Ben Protess offered “a rare behind-the-scenes glimpse into the Obama administration’s decision-making as it prepared to take actions against two big British banks”, HSBC and Standard Chartered. Both banks agreed to large fines, assessed by the US government for their money-laundering operations; Standard Chartered fined $327MM (in addition to a separate fine of $340MM by the state of New York) and HSBC, fined a whopping $875MM by the feds. Apparently there were tensions between the Department of Treasury (Treasury) with the Department of Justice (DOJ) over the federal law-violation fine and also tensions between Treasury and the state of New York Department of Financial Services (DFS) over its action to fine Standard Charted separately for its violations of New York state banking regulations.

Protess reported that there were tensions by the US Treasury Department and the state of New York over its separately fining Standard Charted “In a sign that the British cases pitted authorities against one another, the Treasury Department raised concerns last year that New York’s banking regulator acted against Standard Chartered without sufficiently notifying federal authorities, the documents show. Treasury officials explained the concerns in an internal memo to Mr. Geithner. The memo, internal e-mails show, was prepared for Mr. Geithner as “talking points” ahead of an October meeting with George Osborne, Britain’s chancellor of the Exchequer. In a September letter to Mr. Geithner, Mr. Osborne had expressed significant “concerns” about New York’s action, given that the United States and Britain typically collaborate closely on such cases.”

Protess reported that an internal Treasury memo said that the DFS “notified federal authorities “only hours before its public announcement.” But Protess went on to write “But people close to the case argue that federal authorities were aware that Mr. Lawsky was poised to act. Three months before filing the case, Mr. Lawsky’s office informed Treasury and other federal officials that it planned to soon take action against Standard Chartered for illegally funneling money for Iranian banks and corporations, the people close to the case said.”

Treasury’s disagreement with DFS apparently paled in its disagreement with the DOJ as Protess wrote that “some discussions have taken a more hostile tone as the Justice Department faces scrutiny for not indicting HSBC. The Justice Department has explained that it follows guidelines requiring prosecutors to weigh indictments of businesses with “collateral consequences” like job losses and, in the case of big banks, a threat to the economy. And in a recent letter to Congress, the department explained that it has “contacted relevant government agencies to discuss such issues,” including federal regulators.”

When Treasury joined the DOJ in announcing the settlement back in December 2012 of the federal matter, “a media outlet ran an overnight article in which a professor speculated that Mr. Geithner had not criminally prosecuted HSBC to avoid putting it out of business. By dawn that day, Treasury officials e-mailed one another about the article. Shortly after, National Public Radio retracted the quote and issued a statement saying that Treasury had not been involved in the decision not to indict HSBC.”

So was Treasury a part of the process or wasn’t it?

For those of you following the saga of the Rutgers men’s basketball team, you might have thought that the New Jersey university could not do much worse than it did in the handling of the Mike Rice scandal. However, it appears that you would be wrong as Rutgers University continues to provide the compliance practitioner with lessons to be learned. To recap, Coach Rice was videotaped physically abusing players. He was initially disciplined but after the videotape was released by ESPN, he was fired. Almost immediately thereafter, Rutgers Athletic Director (AD) and General Counsel (GC) resigned over their roles in the matter.

Now Rutgers is back in the news for its hiring of a new AD, Julie Hermann. In a NYT article, entitled “Members of Rutgers Panel See Flawed Hiring Process”, reporter Steve Eder discusses the process which led Rutgers to hire someone who had been sued successfully for gender discrimination and as detailed in an article in the New Jersey Star-Ledger that former University of Tennessee volleyball players had accused Hermann of verbally abusing them while she was their coach in the 1990s. In a letter  obtained by the Star-Ledger, players alleged that Hermann called them “whores, alcoholics, and learning disabled,” and that she coached “through humiliation, fear, and emotional abuse.”

Hermann was also sued in a second lawsuit where, Mary Banker “an assistant track and field coach, claimed she was fired as retaliation for complaining to Hermann and the university’s human resources department about sexual discrimination by the head coach. Lawyers for Louisville said that Banker was fired for underperformance, not in retaliation for her complaints. A judgment in favor of Banker was overturned this year, and the case is pending before the Kentucky Supreme Court.”

Eder reported that “the leaders of the search committee sent an e-mail to the group’s members assuring them that the process that led to Hermann’s hiring had been fair and transparent.” He wrote that “Kate Sweeney and Dick Edwards, the leaders of the Rutgers search panel, wrote an e-mail Tuesday to the other committee members to defuse growing criticism of Hermann’s selection.” He quoted from their email, “You all had the opportunity to examine Julie’s credentials, to spend some time with her when she was on campus, and to provide us with your thoughts regarding her candidacy as Rutgers’s next Director of Intercollegiate Athletics.”

However this statement was contradicted when “at least two committee members claimed that the leaders had whitewashed a process that felt secretive and rushed, leaving them uncomfortable with the university’s selection of Hermann. One member said that concerns over a lawsuit an employee had filed against Hermann were not fully addressed, and that he did not spend enough time with her to feel comfortable that she was the right person to lead an athletic department still reeling from a scandal involving an abusive coach.”

Eder quoted Ken Schmidt, one of the committee members, who wrote to the group, “At this time, please do not try to rewrite the facts. I suspect you will find others that share my opinion.” Schmidt was also quoted as saying, “There was very little information about the candidates disseminated to the larger committee.” A second committee member Ron Garutti, wrote: “Please, let’s not present this as any kind of exemplary process. Subsequent events have proven otherwise.” Garutti also added, ““Please, let us not at this late date attempt to convince ourselves and the public that there was sufficient time to delve deeply” into candidates’ documents.”

So what exactly was the hiring process that Rutgers used to fill its AD position?

The NYT articles and the National Geographic article drove home what my process-analyst wife reminds me about, that being that it is all about the process. Develop a process and then follow the process but also validate the process with additional information and the ‘second set of eyes’ principle.

On the Importance of Effective Compliance Programs (and subregulatory guidance)

Compelled Giving and the FCPA

Compliance into the Weeds-Episode 74, Continued Fallout from Somers

BTW A Mexican climber has been recognized as the first person to scale Mount Everest from both the north and south sides in the same climbing season. David Liano Gonzalez, 33, of Mexico City, was issued a certificate by the Guinness World Records.