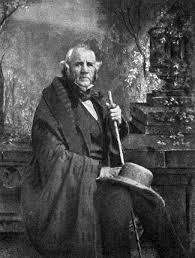 Sam Houston is one of my heroes and today is the 150th anniversary of the death of Sam Houston. While he cannot claim the title as the “Father of Texas”, as that moniker goes to Stephen F. Austin, he is certainly can claim to be the ‘George Washington’ of Texas. He was the General of the Texican Army, which defeated Santa Ana in 1836 at the Battle of San Jacinto, after which the Mexican dictator granted Texas its independence. He was the first President of the Republic of Texas before Texas was granted statehood and, finally, he was the first Governor of the Lone Star State after admission into the United States. And, unlike our present governor (Governor Goodhair), he argued against secession when the rest of the Deep South seceded in 1861.

Sam Houston had also been a protégée of Andrew Jackson and the Governor of Tennessee. Houston served with Jackson in the War of 1812. He was interviewed by Alexis de Tocqueville for his seminal work “Democracy in America”. But he was also a man with many faults. He once caned a US Representative who he felt had insulted him, his arrest was ordered by Congress for the beating and he was eventually found guilty. While Governor of Tennessee, he was married but separated from his wife who claimed he had been emasculated during the Creek War of 1814. He left the Governorship and went to live among the Cherokee Indians who formerly adopted him as a member of their nation, giving him the nickname ‘The Raven’. Lastly, he had a nasty drinking problem.

In the Financial Times (FT) this past week, in its Weekend Edition, had an article entitled “The office almanac. An insider’s guide to what’s new and what’s not”, by Lucy Kellaway who about her review of the history of the workplace office and what had and had not changed over the past 250 years.

Six things that really are new

Six things that are eternal

Six things that will never come back

What does this mean for the compliance practitioner? I think it means that are some options for you to communicate. Take the coffee shop, why not have a meeting in a local coffee shop. If one can do business there, why not some compliance and ethics discussions? Moreover, it goes to show that everything old can be new again.

Why is Sam Houston one of my true heroes? Consider his words after being forced from the Governorship because he opposed secession.

Let me tell you what is coming. After the sacrifice of countless millions of treasure and hundreds of thousands of lives, you may win Southern independence if God be not against you, but I doubt it. I tell you that, while I believe with you in the doctrine of states rights, the North is determined to preserve this Union. They are not a fiery, impulsive people as you are, for they live in colder climates. But when they begin to move in a given direction, they move with the steady momentum and perseverance of a mighty avalanche; and what I fear is, they will overwhelm the South.

A good weekend to all.

Alcatel-Lucent-Did the Baby Get Thrown Out With the Bathwater?

An Oscar Winner for Compliance