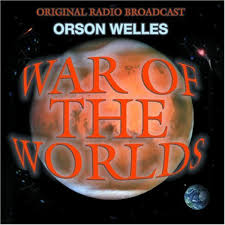 On this day 75 years ago Orson Welles caused a nationwide panic with his broadcast of “War of the Worlds” – a realistic radio dramatization of a Martian invasion of Earth. The show began on Sunday, October 30, at 8 pm. A voice announced: “The Columbia Broadcasting System and its affiliated stations present Orson Welles and the Mercury Theater on the air in ‘War of the Worlds’ by H.G. Wells.” Welles introduced his radio play with a spoken introduction, followed by an announcer reading a weather report. Then, seemingly abandoning the storyline, the announcer took listeners to “the Meridian Room in the Hotel Park Plaza in downtown New York, where you will be entertained by the music of Ramon Raquello and his orchestra.” Then the scare began when a very excited announcer broke in to report that “Professor Farrell of the Mount Jennings Observatory” had detected explosions on the planet Mars. Then the dance music came back on, followed by another interruption in which listeners were informed that a large meteor had crashed into a farmer’s field in Grover’s Mills, New Jersey. The panic was on when as many as a million radio listeners believed that a real Martian invasion was underway.

Fortunately for us Americans, Welles’ show was just that – a dramatized radio show. Just as fortunately for us Americans, and indeed the rest of the world, when it comes to the UK Bribery Act we have thebriberyact.com guys, Barry Vitou and Richard Kovalevsky QC, who continually communicate to us through the shroud of our common language to bring clarity and insight to the UK Bribery Act. Once again proving that they are a prolific duo, they have posted four articles over the past few days which merit discussion.

In the first post I want to bring your attention to, entitled “SFO to target UK PLC in corporate crackdown – it’s still all about the money”, the lads discuss some of the issues that the Serious Fraud Office (SFO) must deal with in the enforcement of the Bribery Act. First and foremost is the way in which corporate liability is determined in the UK. “Broadly speaking in the UK the prosecutor needs to finger someone very senior in the Company for criminal liability to be attributed to the corporate.” Further, “the UK position is the opposite of the Respondeat Superior principle in the US” as the “‘directing mind’ principle has to be satisfied.” They go on to note that “evidence to prove the directing mind principle is often hard to find. The SFO Director has (somewhat cynically!) feigned his ‘surprise’ on a number of occasions that the email chain runs out before you get to the main board.” For their recommendation you should read the rest of the article.

In another post entitled “Corporate prosecutions under the Bribery Act. Racing certainty or outsider? Watch this space” they cite to a talk that SFO Director David Green recently gave at the Pinsent Masons regulatory conference where he said:

“To those who are impatient for the first prosecution under the Bribery Act:-

We still have cases under the old legislation under investigation and awaiting trial.

The new Act is not retrospective, and covers conduct after 1/7/2011.

Comparisons with the US are misleading. Prosecutions under the FCPA of 1977 did not hit their stride until well into this century.

The DoJ has only last November published detailed guidance on the act, based on the action taken under it thus far.

We have charged our first offences under our Bribery Act. There will be more. We have cases under development.

The SFO will bring the right cases at the time that is right for us.

More generally, the SFO currently has some 13 cases involving 34 defendants (2 of which are corporates) in the court system awaiting their trial. 8 of these trial are listed after April 2014.”

From this, the guys emphasize that now is the time to prepare and get your compliance program into shape as “it would be a mistake to do nothing.” And of course, “Watch this space.”

A further post, entitled “YES, YES, YES, YEEES, YEEEEES, YEEEEESSSSS. But. SFO Director repeats benefits of Self Reporting. Again”, has SFO Director Green once again extoling the virtues of self-disclosure but he emphasized, “The SFO’s message is carefully expressed and nuanced. Assume the evidential sufficiency test is passed. If a company made a genuine self-report to us (that is, told us something we did not already know and did so in an open- handed, unspun way), in circumstances where they were willing to cooperate in a full investigation and to take steps to prevent recurrence, then in those circumstances it is difficult to see that the public interest would require a prosecution of the corporate.” He then went on to list reasons why a company should self-report. They include:

The guys made clear their thoughts on the matter when they wrote, “where a corporate comes in and tells the SFO about something that they do not know; where the disclosure of the issue to the SFO is not ‘spun’; where genuine and comprehensive action is taken to remedy the problem; and, where there is a serious commitment going forward to ensure no repeat *then* it is very *unlikely* that the Public Interest test would be satisfied and so it is *unlikely* that there would be a prosecution.”

And finally, in a post entitled “A purchaser worries about liabilities after buying a business with limited information up front”, the guys were asked a question by a reader which read, “Will my company and my Board of Directors likely be prosecuted if they buy another company which has problems after doing limited due diligence?” If you have ever met the guys or heard them speak, you know that practical advice is their raison d’etre. They said, “The key is that you do what you can and that you do the right thing post-closing. This means that in cases where you have had limited opportunity to do due diligence up front you should make sure that post-closing proper diligence is done. You should be doing this sort of thing anyway as you integrate the new Company into your own business. However, it will be important to specifically include anti-bribery in that process and an independent work stream post-closing to look at compliance (or lack of it) needs to be undertaken. If as part of this you uncover a problem it is important that this is dealt with in the appropriate way, namely properly investigated, fixed, cleaned up and remediated.” “You should ensure that if money laundering reporting obligations are triggered the appropriate reports are made to the authorities. They end by noting, “in our view the chances of the Purchaser itself being prosecuted for the sins of the target if the purchaser ‘does the right thing’ post-closing should be slim.”

Unlike Orson Welles, who gave America a fictitious report of an invasion from Mars, thebriberyact.com guys continue to shine a light on all things Bribery Act related. Their latest reports from the UK clearly indicate that the SFO is picking up steam and moving forward. You do not have to be afraid, but you do have to be very prepared.