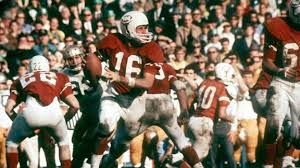 It is Friday and this week’s college football began last night with the Texas Longhorns on television. The game reminded me about James Street who died this week. Street was as unlikely a football hero as there could have been for the “Horns”, he was the star quarterback who led the University of Texas to the 1969 National Championship and a win over Notre Dame in the Cotton Bowl. To do so, Texas had to beat the University of Arkansas, in the final game of the season. In that game, with the Longhorns down 14-8 and with 5 minutes 51 seconds left in the fourth quarter, Texas had the ball on the fourth down with 3 yards to go. Street went to the sideline to get the call from Head Coach Darrell Royal who called “Right 53 veer pass.” As reported in his obituary in the New York Times (NYT), “The play, a deep pass with only one receiver, the tight end, seemed to Street like the most improbable call in that situation. It had not worked the handful of times Texas had tried it. Street had expected a counter option to pick up a first down. He asked Royal if he was sure. “Damn right, I’m sure,” the coach growled. In the Texas huddle, Street, who was 5 feet 10 inches and weighed 168 pounds, said, “Boys, you ain’t gonna believe this,” then called the play. Bob McKay, a tackle, wisecracked, “Damn it, Street, you can’t throw the ball that far.” But he could, in this case resulting in a 44-yard completion to tight end Randy Peschel. Two plays later, Texas scored and won, 15-14.” A truly exceptional result for a quarterback who was the first great wishbone quarterback.

One of the things recently discussed in the House Judiciary Committee hearing on amending the Foreign Corrupt Practices Act (FCPA) to add a compliance defense was that companies from other countries were engaging in bribery and corruption to secure business in places like India and West Africa. While it is somewhat difficult to see how adding a compliance defense, which requires an effective compliance program to be in place, can be used to defeat non-US companies alleged to be paying bribes to obtain business requires a fairly vivid imagination. However, there is a way to beat the corrupt companies and that is through competition in the marketplace.

Obviously this means through delivery of better goods and services. But it may also mean having a Corporate Social Responsibility (CSR) component in a country. The CSR can take many forms. Some of these can include a US company acting as a funding angel for indigenous start-up businesses; training of locals to be more than simply employees and contractors to a US company but also training in how to set up and run a business. Clearly if a local workforce is to become skilled it will need specific training, particularly if the local workforce is doing more than simply digging ditches. The CSR can also include funding of local charities, organizations or projects such as buying computers for a local school.

I am talking about more than compelled giving as the use of CSR, which can be not only a powerful tool for a business to develop relationships in a country but it can foster US foreign policy as well. One of the blogs I follow is Jason Poblete’s DC Dispatches. While Poblete and I sit on the opposite ends of the political spectrum, I admire him for one thing he constantly discusses which is that there are market solutions to problems and issues. He points to business solutions for a variety of issues and US companies engaging in local CSR development in foreign countries sounds like one, to me, that benefits both the company involved and the US in general. In other words, such CSR activity can be a market solution the problem of bribes paid by non-US companies to garner business.

But some US companies fear that if they engage in such a construct effort, they will run afoul of the FCPA. For instance, particularly in the energy industry, skilled training is delivered at a much higher level here in the US than in, say, Africa. This means that officials, employees or others involved in national oil companies need to come to the US for training, with all the attendant expenses. Yet many companies are fearful such activity will run afoul of the FCPA and draw Department of Justice (DOJ) scrutiny. Yet such activity benefits not only the US Company that provides it but the US government in general and the overall positive perception of American business. This perception is not something to be discounted.

The DOJ has recognized that charitable giving does not necessarily violate the FCPA. There have been four Opinion Releases on this topic and in none of these matters did the DOJ seek enforcement against the requesting party.

This request was from a US-based energy company that planned to operate a plant in South Asia, but there was no medical facility in the area. The energy company planned to donate $10 million for equipment and other costs to a medical complex that was under construction nearby. The donation would be made through a US charitable organization and a South Asian LLC.

This request was from a Delaware company doing business in Africa. The company planned a pilot project in which it would contribute $25,000 to the Ministry of Finance in the country to improve local enforcement of anti-counterfeiting laws. The contribution would fund incentive awards to local customs officials, which is needed because this African country is a major transit point for illicit trade and the local customs officials have no incentive to prevent the contraband.

This Opinion Release dealt with a US-based Micro Financial Institution (MFI) operating in an unnamed Eurasian country. The Release specified the three levels of due diligence that the US MFI had engaged in on the proposed locals MFIs which were listed as eligible to receive the funding. In addition to the specific discussion of the due diligence performed by the US MFI and noting the controls it had put in place after the funding was scheduled to be made the DOJ also listed several of the due diligence and/or controls that it had previously set forth in prior Opinion Releases relating to charitable donations.

Jason Poblete is right; there are market solutions out there which deal with US competitiveness in a world awash with bribery and corruption. These solutions sometimes involve creative assistance to localities to raise their standards of education, living and income. Such intentions are not corrupt as that term is defined by the FCPA. While they certainly can benefit the company which provides the financial or other assistance, there are other benefits for more than simply the players involved.

So please do not argue that US companies are at a disadvantage. James Street was an exceptional quarterback at the University of Texas running the wishbone option to perfection. American exceptionalism still exists and the tangible benefits of it are sought all over the globe. The FCPA was passed in part to aid American businesses and it should not be used as stumbling block to do so when it is properly followed.