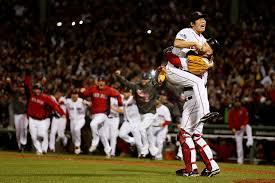 On Wednesday the Boston Red Sox won their first World Series at home since 1918. The Red Sox had finally bested the Curse of the Bambino back in 2004 when they defeated their 2013 opponent, the St. Louis Cardinals, but they won the Series in St. Louis. The celebration was palatable, even watching the game on television. To say that I am surprised both Jay Rosen and Charlie Nugent are working today is putting it mildly, although I have only received emails from both lifelong Red Sox fans, so perhaps their collective voices are still too hoarse to speak over the phone. Whichever it is, congratulation lads, to the Red Sox and to the entire Red Sox nation.

The Red Sox certainly showed their character after last year’s miserable season. Seemingly disdaining the current analytical mania in professional baseball, the brought seasoned veterans, who no other teams ostensibly wanted, into the clubhouse and, much like the Phoenix, rose from last years’ ashes to claim the championship. So character does matter. It matters in baseball and I would posit it matters in business.

I thought about business and the character issue when I read an article in the New York Times (NYT), entitled “Deal Reached in Inquiry Into Visa Fraud At Tech Giant”, by Julia Preston. In her article, Preston detailed how the Indian tech company Infosys agreed to pay a $34MM fine for what one federal prosecutor called “systematic visa fraud and abuse” for bringing Indian national workers to the US. Preston further reported that “After an investigation of more than two years, prosecutors on Wednesday will unveil the settlement as well as its accusations that Infosys “knowingly and unlawfully” brought Indian workers into the United States on business visitor visas since 2008, which avoided the higher costs and delays of a longer-term employment visa the workers should have had. They will charge that Infosys systematically submitted misleading information to American immigration authorities and consular officials to obtain the faster visas, unfairly gaining a competitive edge and undercutting American workers qualified for the jobs.”

Apparently the company had a detailed and specific program to lie, cheat and steal their way to obtaining visas to which it was not entitled. Preston reported that “According to the court documents, from 2008 through 2011 Infosys “as a matter of practice” submitted false invitation letters intended “to deceive” immigration and consular authorities by indicating that Indian workers were coming for meetings when they were in fact being assigned to technology contracts here.”Infosys prepared “do’s and don’ts” lists that advised Indian workers how to mislead American immigration authorities in B-1 visa application letters and interviews, according to the documents, to avoid the appearance that they were coming to work. “Do not mention activities like implementation, design and testing, consulting, etc. which sound like work,” was one of the instructions.

Infosys regularly misinformed immigration officials about where Indian workers on B-1 visas would travel in this country, to avoid a more onerous requirement of the H-1B visa that the company demonstrate that it was not undercutting prevailing wages paid to Americans in places where Indians would be assigned, the documents show. Infosys also rewrote some contracts with American companies to conceal the fact that it was using B-1 visa holders to perform jobs that were ““otherwise required to be performed by United States citizens or legitimate H-1B visa holders,” according to the documents.”

The matter was settled via a civil not criminal resolution. Most interestingly, not only did Infosys vigorously contest all the charges against it, it claimed the government has it all wrong. In an article on the Dallas News online site, entitled “Tech giant Infosys settles allegations of visa fraud in Plano office for $34 million”, reporter Valerie Wigglesworth reported that the company still denies that it did anything wrong. She wrote, “In a statement posted online, the company said: “Infosys denies and disputes any claims of systemic visa fraud, misuse of visas; for competitive advantage, or immigration abuse. Those claims are untrue and are assertions that remain unproven. The company’s use of B-1 visas was for legitimate business purposes and not in any way intended to circumvent the requirements of the H-1B program.” Pretty big cojones there, wouldn’t you say for a company that agreed to a $34MM fine for the same conduct.

While I find it somewhat inconsistent to deny anything is wrong, while paying a fine of $34MM for the same conduct; the more troubling issue is character. If a company “as a matter of practice” submits false documents to American government officials to gain illicit visas to enter the United States and prepared a list of “do’s and don’ts” to mislead American government authorities, a fair question might be as to the company’s commitment to doing business ethically and in compliance with international and domestic anti-corruption legislation. Put simply, if you will cheat to get a visa, what else might a company, be willing to tolerate?

But leaving aside the issue of the company’s character and whether the Department of Justice (DOJ) or Securities and Exchange Commission (SEC) should initiate a company inquiry into the company’s Foreign Corrupt Practices Act (FCPA) program; should the character of a company for generally following the laws be a factor in your due diligence assessment? What about the US Company’s which employ Infosys as a consultant or contractor? What about all those US workers that Infosys put out of employment because they illegally paid Indian wages to Indian nationals, illegally working in the US under visas obtained through “systematic visa fraud and abuse”?

All I can say is that character sure mattered to the Boston Red Sox. Congrats to Bean Town.

FCPA Compliance Report-Episode 278, hiring the family members of foreign officials under the FCPA

Day 15 of 31 Days to a More Effective Compliance Program-Day 15 | How do you evaluate a risk assessment?

Compliance into the Weeds-Episode 50, Where’s the Upside?

Another Nigerian Bribery Scandal Settlement and the NL MVP Award