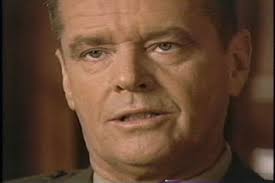 Tom Cruise: Did you order a Code Red?

The above lines were spoken in the movie version of “A Few Good Men”. If there was ever one scene which demonstrated that Tom Cruise can really act; for my money this was the scene. He held his own with Jack Nicholson, while both were just barely controlling anger that almost caused them both to burst.

I thought about the above line while reading and hearing this week about the ongoing imbroglio inside the Miami Dolphins. For those of you who do not follow pro football, Jason Martin, an offensive lineman left the team, allegedly due to the bullying and taunting of another team mate, Richie Incognito. Martin released at least one voice mail which Incognito had left on Martin’s cell phone, which to say the very least could come across as a racist rant. It also appears that Martin was ‘bullied” into paying for certain veterans on the team to fly to and be entertained in Las Vegas to the tune of over $15,000. (A trip which Martin, as a rookie, was not invited to participate in.) Martin has also alleged other taunts and bullying had been directed his way by Incognito. Incognito for his part initially claimed it was all in good fun, sort of ‘boys will be boys’ in the context of a professional football team locker room. He later changed his story to say that Dolphins management, in the form of an un-named coach, had asked him to ‘toughen up’ Martin.

When the story broke earlier this week, Dolphins management suspended Incognito. Since that time, the sports commentariat has been pontificating on this matter non-stop. Additionally, several pro football players have weighed in. Andrew Sharp, writing in Grantland.com, in a piece entitled, “The Miami Dolphins and Everything That Will Never Make Sense” summed up the different camps that pro football players broke into over this story as follows “Some players are pragmatic about what went wrong (Fletcher), a lot of players think the victim should’ve handled this differently, some are just happy that one of the dirtiest players in the league is getting his comeuppance, and others feel like they need to defend Incognito. That’s why the reactions from players have been so interesting. Everything that’s black-and-white to outsiders seems pretty gray among actual football players.”

As one of millions of American males who participated in organized sports over the years, I certainly understand that things are tolerated in locker room that are not tolerated in more polite parts of society. The sports ethos of working things out within the team is a strong one. Finally as a man sometimes you either feel the need to stand up against bullying yourself or at least society expects you to take some self-responsibility and take direct action. But the role of football and the place of the locker room sometimes are antithetical to greater societal norms. A recent example from pro football was the New Orleans Saints ‘Bounty-Gate’ Scandal where an Assistant Coach was caught on tape urging his defensive players to “go after the head” of an opposing quarterback, explaining that if you kill the head, the body will wither and die.

Not exactly the life lessons one would hope to impart in sports.

But what are the compliance lessons from this sordid episode. As you would expect, former football player Jim McGrath wrote about the matter on his site, Internal Investigations Blog, in a post entitled, “Best Focus for NFL’s Richie Incognito Investigation”. McGrath concluded, “What Incognito might have done to a teammate is rotten, seemingly antithetical to team cohesiveness, and injurious to the club’s success this season and maybe beyond. And, sadly, it is not out of character for too large a chunk of today’s NFL talent pool. But it may violate organization-wide rules and – if so – whether the Dolphins did or didn’t enforce those rules is a good focus for this inquiry.”

From my perspective and the lesson for the compliance professional is that allegations of inappropriate conduct must be taken seriously and investigated. It has been reported that the Chinese government investigations into GSK came about from a ‘disgruntled employee’ who did not believe he had received sufficient termination benefits. GSK apparently felt it had sufficient grounds to terminate the employee without the payment of such compensation. I guess not.

For many employees it is about perceived fairness. This would seem to call into play the Fair Process Doctrine, which recognizes that if there are fair procedures, not arbitrary ones, in a process involving rights, people are more willing to accept negative, unfavorable, and non-preferred outcomes when they are arrived at by processes and procedures that are perceived as fair.

In the context of any compliance related investigation, if your employees do not believe that the investigation is fair and impartial, then it is not fair and impartial. Further, those involved must have confidence that any internal investigation is treated seriously and objectively. One of the key reasons that employees will go outside of a company’s internal hotline process is because they do not believe that the process will be fair.

Finally, if any investigation results in discipline, it must not only be administered fairly but it must be administered uniformly across the company for the violation of any compliance policy. Simply put if you are going to fire employees in South America for lying on their expense reports, you have to fire them in North America for the same offense. Failure to administer discipline uniformly will destroy any vestige of credibility that you may have developed.

The Martin/Incognito affair will continue to play out for us all to see. However for the compliance professional, now is the time to review your whistleblower program and other mechanisms for employee reporting of complaints. For if employees do not believe that they are being treated fairly, they can easily become a government whistleblower under the Dodd-Frank Whistleblower provisions or act like the disgruntled employee in China, who blew the whistle on GSK.

And one last thing, do not order a ‘Code Red’ for that employee who is not viewed as a ‘team player’.

Proposed Amendments to the FCPA