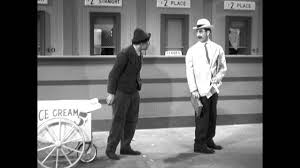 One of my great loves is the Marx Brothers. I fell in love with their rapid-fire wiseacre remarks as a teenager and have been enthralled with them since then. I have seen all of their movies, most of their television appearances and even read some of their radio scripts. I was reminded of the their unique brand of comedy and contribution to the great good when I read an article in the Financial Times (FT) by Danny Leigh, entitled “Souped-up comedy”. Leigh wrote the article around the British Film Institute’s (BFI) 2015 season, which includes a year-long retrospective of Marx Brothers movies. To honor both the BFI and my beloved Marx Brothers, this week, I am featuring series of Marx Brothers themed blog posts.

Today, I want to look at what many believe is one of their funniest skits, which comes from the MGM-released movie A Day at the Races, the “Tootsie-Frootsie” Ice Cream/Code Book scene. Tony (Chico) poses as an ice-cream vendor outside the racetrack – he is actually a con artist selling racing tips on horses. He knows that in the next race, he can win with 10-1 odds with a bet on Sun-Up, but he needs the cash. So he sets up the scam as gullible victim Dr. Hackenbush (Groucho) arrives at the racetrack to bet two dollars on Sun-Up. Hackenbush is advised by Tony to bet on Rosie, a 40-1 shot. At the betting window, Hackenbush bets two dollars on Rosie, but the bookie tells him the race is already over – Sun-Up was the winner. Hackenbush realizes he has been taken. He thinks for a moment, then dumps the books back in the cart and takes the scammer’s place waiting for a victim, crying: ”Get your Tootsie-Frootsie. Nice ice cream. Nice Tootsie-Frootsie ice cream.”

I thought about the Tootsie-Frootsie ice cream scene in the context of hiring and Foreign Corrupt Practices Act (FCPA) compliance. One of the theories of conventional wisdom about anti-corruption compliance is that you will never be able to reach 5% of your workforce with compliance training because they are predisposed to lie, cheat and steal anyway. Whether they are simply sociopaths, scumbags or just bad people; it really does not matter. No amount of training is going to convince them to follow the rules, such as the FCPA, UK Bribery Act or even foreign domestic laws against bribery and corruption, consider the Chinese domestic laws that GlaxoSmithKline PLC (GSK) was convicted under, they were of no import to such people. They do not think such laws apply to them and they will lie, cheat and steal no matter what industry they are in and what training you provide to them. But knowing such people exist and they may be able to lie, con or otherwise dissimilate their way into your organization does not protect your company from FCPA liability when they inevitably violate the law by engaging in bribery and corruption. It is still the responsibility of your company to prevent and detect such conduct and then remediate if it occurs. Simply put, if you hire Chico, you are going to get a Tootsie-Frootsie ice cream.

I thought about these concepts when reading an article in the Corner Office column of the New York Times (NYT), entitled “Three Keys to Hiring: Skill, Will and Fit”, by Adam Bryant where he reported on an interview with Marla Malcolm Beck, the Chief Executive Officer (CEO) of Bluemercury. She had several lessons that I thought would be helpful for Chief Compliance Officer (CCO) or compliance practitioner in general and in particular when trying to have your company avoid bringing in the five per-center mentioned above.

Beck related an early leadership lesson that she learned during college, she ran unopposed to be President of a student organization. Since she was unopposed, she ran no campaign but did not receive a majority of votes and therefore was not elected to the position. So she tried to learn from her mistakes, “In the second election, someone ran against me, but I had interviewed a lot of people about why I didn’t get the position the first time, and they said I wasn’t human enough, I wasn’t passionate enough. So I talked more about the mission and my dreams for the organization, and I think people respected me for getting up there again, and I got most of the votes.” For the compliance practitioner or CCO, I think the message here is both communication and passion. If you do not believe in the anti-corruption compliance regime that you are pushing, it will be nearly impossible for the rest of your far-flung corporate work force to believe in it. Talk about compliance and the positive aspects of your program for your company. If you sit in your office, situated as Dr. No in the Land of NO, you and your program will get NOwhere fast.

Another valuable lesson that Beck related was one she learned early on in her entrepreneurial career and it related to problem solving. She said, “Early on, I kept a lot of the hard problems to myself. Not only did that put more pressure on me, but also people can start working on the wrong things, and you have no way to course-correct if you don’t give them the “why.” I don’t think I was brave enough early on, and I’m more brave now about not keeping things to myself — things that are working, things that are not working, and just being more fluid with communication. I still catch myself now when I’m asking people to do things, and I have to go back to why it’s important and why we need to do this as a company.”

As a CCO or compliance practitioner, you will never have enough time to answer every question, nor should you. If you can provide your employee base the tools to make the right call, I think you will find most of the time they will. In a compliance leadership role, you should have two overriding goals: (1) burn compliance into the DNA of your company deeply enough that the business folks will come up with the right response almost all the time, and (2) be there when they cannot do so. Beck’s query of “why it’s important and why we need to do this as a company.”

I found Beck’s remarks on hiring the most interesting. I have long argued that Human Resources (HR) is a key component in any best practices anti-corruption compliance program. This is particularly true in hiring and promotion of employees to senior management. Avoiding the hiring or promotion of the sociopaths, or even the Chico’s of the world, is a key tool that HR brings to the table. Beck’s approach is to take a short interview technique in which she attempts to assess, Skill, Will and Fit. She said, “I’ll ask, “What’s the biggest impact you had at your past organization?” It’s important that someone takes ownership of a project that they did, and you can tell based on how they talk about it whether they did it or whether it was just something that was going on at the organization. Will is about hunger, so I’ll ask, “What do you want to do in five or 10 years?” That tells you a lot about their aspirations and creativity. If you’re hungry to get somewhere, that means you want to learn. And if you want to learn, you can do any job. In terms of fit, I’m looking for people who have some sort of experience with a smaller company. At big companies, your job is really one little piece of the pie. I need someone who can make things happen and is comfortable with ambiguity.”

Through such a structured series of questions, a properly trained HR professional can begin to assess whether an employee might have a propensity to engage in bribery and corruption. By adding information about your company’s values towards doing business ethically and in compliance, you can introduce this topic at either the interview evaluating process or in the promotion process. While true sociopaths will most certainly lie to you, perhaps even convincingly, by introducing the topic at such a pre-employment stage, they may be encouraged to take their skills elsewhere. Or you can just get your Tootsie-Frootsie ice cream. 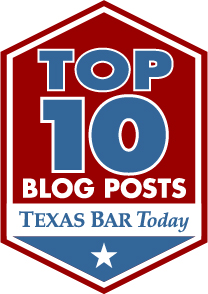 The King’s Guitarist and Leadership

FCPA Reporting-To Whom Does Your CCO Report?

The Avon FCPA Settlement, Part I