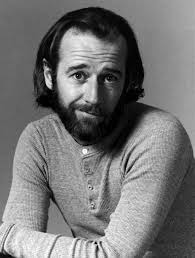 On this date in 2008 George Carlin died. If you grew up in the late 1960s or early 1970s and you had anti-parental or anti-establishment inklings, which of course all teenagers do, you knew about George Carlin. In the early 1960s, Carlin was a relatively clean-cut, conventional comic. But around 1970, he reinvented himself as an eccentric, biting social critic and commentator. In this new incarnation, Carlin began appealing to a younger, hipper audience. He grew out his hair and added a beard together with a wardrobe in the stereotypically hippie style.

Carlin’s comedy also became counter-culture, not Cheech and Chong, hippy-dippy dopers, but with pointed jokes about religion, politics yet with frequent references to drugs. His second album with his new routine, FM/AM, won a Grammy Award for Best Comedy Recording. My favorite cut was the 11 O’Clock News. But it was his third album Class Clown that had, what I believe, to be the greatest comedy monologue ever, the profanity-laced routine “Seven Words You Can Never Say on Television.” When it was first broadcast on New York radio, a complaint led the Federal Communications Commission (FCC) to ban the broadcast as “indecent.” The US Supreme Court later upheld the order, which remains in effect today. The routine made Carlin a hero to his fans and got him in trouble with radio brass as well as with law enforcement; he was even arrested several times, once during an appearance in Milwaukee, for violating obscenity laws.

Interestingly I thought about Carlin and his pokings of the Establishment (AKA The Man) when I read several articles over the weekend about the recent spate of arrests around the Petrobras bribery and corruption scandal. In article in the Wall Street Journal (WSJ), entitled “Brazil Probe Sweeps Up Corporate Magnates” Will Connors, Rogerio Jelmayer and Paul Kiernan reported that “Brazilian officials arrested the heads of two Latin American construction giants, alleging they helped to mastermind a cartel that stole billions of dollars from state-run oil company Petrobras with the help of corrupt politicians to whom they paid kickbacks.” Also arrested with the heads of the two companies, Marcelo Odebrecht, head of Odebrecht SA and Chief Executive Officer (CEO) of Andrade Gutierrez, Otávio Azevedo.

The WSJ article reported that “Odebrecht is Latin America’s largest construction conglomerate, with business in the U.S., Europe and Africa, and whose head, Marcelo Odebrecht, is a household name in Brazil. Andrade Gutierrez has business in 40 countries. The privately owned companies are deeply involved in the development of stadiums and infrastructure for the 2016 Summer Olympics in Rio de Janeiro.” Moreover, Odebrecht is reported to have “a presence in 21 countries”. Obviously a question is if the company had engaged in bribery and corruption in Brazil, did they do so in any of the other countries in which they are doing business?

Interestingly, these arrests “come months after the heads of other construction companies were detained by Brazilian authorities.” Indeed in a BBC article in , entitled “Petrobras scandal: Top construction bosses arrested in Brazil”, David Gallas said, “Odebrecht had been named by former Petrobras executives as one of the companies that allegedly paid bribes in exchange for contracts with the oil firm, but until now the firm had not been targeted by investigators.” The WSJ article quoted Brazilian prosecutor Carlos Fernando dos Santos Lima who said at a news conference that the executives from the two companies had not been arrested earlier as the entities, “had a more sophisticated system for making the alleged bribe payments, using foreign bank accounts in Switzerland, Monaco and Panama, so it took longer to prove their case.” David Fleischer, a Brasilia based political analyst, quoted in the WSJ article was even more circumspect. He said, “The prosecutors are very careful. If you’re going after big fish you want to make sure you can take them down.”

Brazilian police said the arrests were “Erga omnes” which the WSJ translated from Latin as “towards all”. I thought about that statement in light of the ongoing debate about enforcement of the Foreign Corrupt Practices Act (FCPA) here in the US. On one side is the Chamber of Commerce and their allies who raise the ever-burgeoning cry that the Department of Justice (DOJ) needs to prosecute the invidious ‘Rogue employees’ who violate the FCPA. You will notice they never want the DOJ to look at the executives who might facilitate payment of bribes in the first place; whether through faux commitment to doing business in compliance, failing to properly allocate resources to compliance and ethics, simply rewarding those employees who git ‘er done no matter what the circumstances or (my favorite) putting a paper program in place and calling it a best practices compliance program.

Indeed those progenitors of relaxed enforcement want the DOJ to back off and let them do business the old fashioned way. However, if the bribery and corruption news from the first half of this year has told the world anything, it is about the dire effects of allowing such illegal conduct to take place and warning against slacking off laws which mandate doing business without bribery and corruption. In another WSJ article, entitled “Roots of a Brazilian Scandal That Weighs Heavily on the Nation’s Economy, Politics”, Marla Dickerson noted, “The scandal has crippled Petrobras, Brazil’s largest and most important company. In late April, the company wrote off more than $16 billion related to losses from graft and overvalued assets. The company’s woes have all but paralyzed the nation’s oil and gas sector. Hurt by slumping oil prices and strapped for cash, Petrobras has slashed investments, sparking a wave of credit downgrades, bankruptcies and layoffs among its suppliers that the weighed on Brazil’s economy.”

I wonder what George Carlin might have thought about all of this. He might have said that what else would you expect but I am relatively certain he would have done so while also sticking his thumb in the eye of The Man.