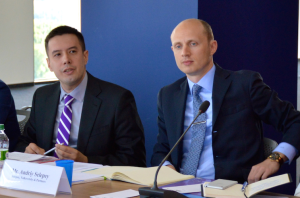 Ed. Note-today we have a guest post from two noted compliance practitioners from Ukraine, Timur Khasanov-Batirov and Andriy Selepey who discuss the dangers of a paper compliance program.

Corruption is the main problem of the Ukrainian economy. Both Ukraine and its international donors recognize that absence of an effective antibribery measures prevents attraction of foreign investments and negatively affect’s country’s business environment.

There are positive changes as creation of a brand new anticorruption agencies and adoption of antibribery laws. Would it be enough? While time is needed to get the full the picture, some downsides appear already. This for instance relates to anticorruption programs, a new concept for the local corporate world introduced by “Law on Prevention of Corruption”. The concept is a new one, as historically fighting with corruption in the national legal framework was not linked to corporate compliance.

Since April 2015 major state controlled companies and participants of high – priced state bids are obliged to implement anticorruption program. Sounds as a big step towards transparency. To start with, the law specifies elements of such programs. Among others, the following items are recommended by the law to be included into the corporate compliance program:

It should be also specifically noted that the law has established criteria for Compliance officers. Thus, for instance there is a regulatory ban to appoint as a Compliance officer an employee who due to his or her job functions has a conflict of interest regarding execution of compliance functions.

At last but not least, participants of the state bids, which do not have anticorruption programs, are not able to get lucrative contracts.

In reality, things appear to be more complicated. Companies adopt anitbribery programs and appoint Compliance officers but looks that there is no governmental mechanism to evaluate efficiency of these efforts. When we refer to “governmental mechanism of evaluation”, such helpful instruments as the DOJ’s and SEC’s Joint Resource Guide to the U.S. FCPA come to mind. For evaluation these agencies “…employ a common – sense and pragmatic approach to evaluating compliance programs, making inquiries related to three basic questions:

(p.56 of the Guide). Even though the current Ukrainian regulatory framework does not have analogue of this approach we recommend corporates to utilize it for in-house self-evaluation. Neither there is prescribed penalty in Ukraine for absence of the compliance program nor credits granted for its effectiveness in a course of investigation. As a result, adoption of a corporate compliance program might become a formality, another piece of paper for the package of documents prescribed for state bidding process.

Companies might find themselves in a vulnerable position when compliance program adopted in accordance with local rules is just not enough. Assistant Attorney General Caldwell at the Compliance Week Conference recently announced the “real world” test that the corporates might pass. It was particularly noticed that:

‘’We [Department of Justice] look not just at the written policies, but to other messages otherwise conveyed to employees, including through in-person meetings, emails, telephone calls, incentives/bonuses, etc.; and will make a determination regarding whether the company meaningfully stressed compliance or, when faced with a conflict between compliance and profits, encouraged employees to choose profits.

A company’s policies should be clear and in writing and should easily be understood by employees. But having written policies – even those that appear specific and comprehensive “on paper” – is not enough.’’

What could be done from the practical point of view to avoid “paper” compliance at the corporate level?

Firstly, we recommend companies operating in high-risk markets as, for instance, Ukrainian to build effective compliance frameworks rather than just technically follow written regulations. As Ukrainian saying states (probably about corporate compliance): “One should act rather than talk”.

Secondly, we urge top managers to re-assess risks of bribery in new era invoked by the situation in Ukraine. Business is facing new and previously unknown challenges raised as consequences of the current economic, political and regulatory changes. Re-assesment of compliance risks will allow companies to effectively address new challenges in Ukraine, a giant but risky market.

Thirdly, for companies which run FCPA based compliance program with presence in that country we recommend to check out Ukrainian requirements as well. The reason to do that is defined by the Guide (p.56): “…Although the focus [of DOJ and SEC] is on compliance with the FCPA, given the existence of anti-corruption laws in many other countries, business should consider designing programs focused on anti-corruption compliance more broadly.”  Besides that, FCPA covered corporations with operations in Ukraine might find useful to add Ukrainian compliance elements to their existing programs in order to strengthen them and adjust to local regulatory framework.

There is one more important signal for compliance practitioners and managers responsible for operations in Ukraine. Local anticorruption landscape has been changing very rapidly, almost daily so to say. Myriads of legal initiatives in the anticorruption area for different industries have been discussed by the political elite and civil society. In their turn, new anticorruption bodies are about to proceed with criminal investigations and checks. To be on the safe side we recommend corporates to monitor local regulatory and legislative developments.

Finally, we find useful to re-inforce in – house communication and training efforts for local personnel to stress firmness of corporate ethical values in any location and under any circumstances. We believe these efforts complemented with the embedding of Ukrainian anticorruption rules will allow companies to effectively respond to new challenges and avoid “paper” compliance.

Timur Khasanov-Batirov, Co-Chair of the Compliance Club of the American Chamber of Commerce in Ukraine

Venice and Compliance: Doing It the Old Fashioned Way

Day 15 of 31 Days to a More Effective Compliance Program-Day 15 | How do you evaluate a risk assessment?

Board Members and Prudent Discharge of Duties under the FCPA